RainWatch – A dry week ahead for the West Coast 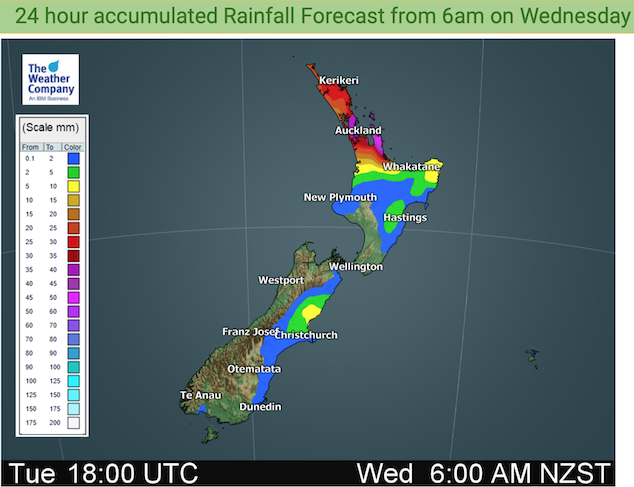 You know when most of the country is generally having unsettled conditions that one of the wettest parts of the country sees mainly dry / sunny conditions. This is the case going forward for the next 5 days at least along the West Coast of the South Island.

Wednesday is mainly dry for the South Island however expect a few patchy showers or areas of drizzle to move in overnight for the east (especially Banks Peninsula northwards). For the North Island a front moves in from the west bringing rain to Auckland by evening, heavy falls possible later / overnight. Cloudy skies for the east coast (Gisborne to Wairarapa) bring the odd shower or drizzle patch.

Drizzle or showers for eastern parts of the country and about Northland on Thursday, rain for East Cape becomes heavy in the evening. Rain about Auckland, Waikato and Bay Of Plenty with a chance of heavy falls. Areas of rain or showers for the North Island on Friday in an easterly airflow, highest totals from East Cape through to Hawkes Bay, drizzle for northeastern parts of the South Island.

A low pressure system continues to bring showers to parts of the North Island on Saturday, Coromandel through to Bay Of Plenty sees rain. Patchy rain for Nelson / Marlborough, drizzle about Canterbury. Overnight cool southwesterlies spread over the South Island with showers in the east, dry out west.