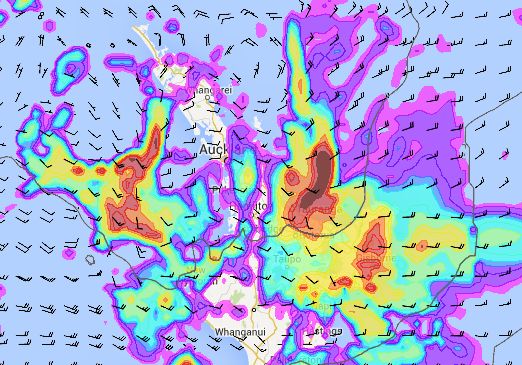 Two regions who want rain the most – Northland and Auckland – are now starting to receive it as a sub-tropical low continues to inch slowly towards New Zealand.

Yesterday was the first round of weather which came in the form of thunderstorms over the central North Island.  Today is a slightly different set up – more of a standard band of rain moving down from the north – but amongst this thick cloud cover are the tropical elements which make this system stand out.

By that we mean localised heavy downpours.

Afternoon heating is already helping the rain clouds to rapidly fan out over northern New Zealand.  Localised falls over the upper North Island – which includes Waikato, Bay of Plenty and Coromandel as well – will continue to develop across Wednesday PM and into early Thursday.

“This isn’t one big band of rain moving down – instead it’s made of small but intense pockets of rain and showers” says head weather analyst Philip Duncan.  “Yesterday Waikato received some of New Zealand’s heaviest rain – but the main centre of Hamilton received little to nothing at all.  This is what we mean by ‘hit and miss’ – and this system will perform in a similar way today and tonight as it moves southwards towards Northland, Auckland, Waikato and Bay of Plenty”.

WeatherWatch.co.nz expects more people in the upper north to receive rain today than yesterday and less farms missing out.

The thicker cloud cover is keeping temperatures down a bit in the north.

Tomorrow the main focus is expected to be around the lower North Island and upper South Island and we’ll be tracking it – however afternoon heat showers may again form in northern areas.

Have your say – How much has fallen at your place so far this week?  Or are you in one of the “miss” spots?

Nothing here at all in Tuakau my lawn has turned brown!

13mm so far this week in Kaitaia.Hope this next lot doesn’t slip down the east coast.