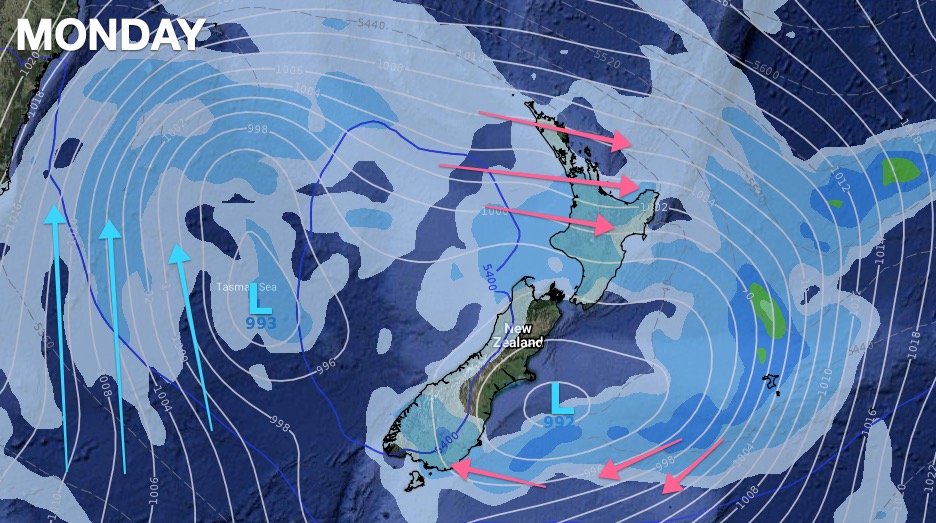 This weekend showers will continue on in northern NZ with rain around on Monday as low pressure smothers the country.

But next week the theme is really back to sou’westers. A typical late August set up.

The sout’westers will mean cooler daytime highs but the windier weather means milder overnight lows for southerners for a time. Eastern NZ looks to continue on with mild weather at first but the whole country will feel the cooler change by mid next week.

Showers today (Friday) and into the weekend will be randomly heavy – even some isolated thunderstorms in this spring-like airflow. Already this week Auckland has had good rainfall, including around the Hunua ranges where water catchment dams are. The rain is a positive – but it’s important to note the city is still in a rainfall deficit so while August has been a very positive month seeing rainclouds return, it’s not enough to relax yet on water restrictions. Keep those short 4 minute showers coming!

www.RuralWeather.co.nz is currently expecting 25mm of rain over the coming week in the Hunua Ranges – may be closer to double that if a heavy downpour or two hits the area and lingers long enough.

So this past week has seen a lot of northerlies and sub-tropical winds. Next week, however, is dominated by a southerly change which peaks on Wednesday and eases by the weekend when high pressure and slightly milder west to north west winds return.