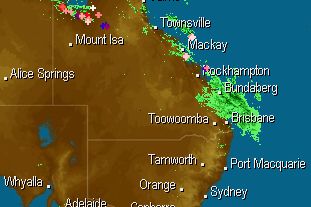 Weatherzone — A broad trough and moist onshore winds have caused yet more heavy rainfall over much of Queensland in the last few days.

Brisbane received some heavy rain on Monday the 27th, with 60mm recorded in the gauge to 9am. The trough moved further offshore later on Monday allowing the rain to ease in Brisbane, but a widespread 50-100mm was still recorded elsewhere over the southeast. Brisbane received 34mm to 9am today, while Pittsworth further to the west was soaked with a 24 hour-total of 114mm.

The Wide Bay and Burnett and Capricornia districts received the most rainfall, with many places receiving daily totals above 100mm until Tuesday 28th. Baralaba recorded their wettest December in 35 years with falls of 121mm in only 24 hours. Bundaberg’s gauge was hit by the most, with 165mm to 9am. Bundaberg has not only had its wettest December day in 37 years, they have also had their wettest total for December since 1943.

The trough should finally move further east on Wednesday and clearer skies will then be seen over the Southeast.