POLL RESULTS – Lusi in the sky…but not enough rain 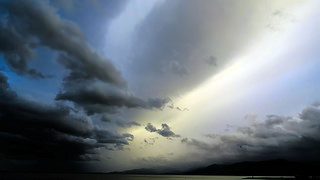 In what turned out to be one of our highest traffic weeks ever here on the site, Tropical Cyclone Lusi came and went, leaving some disappointed, others angry, and only a very few, apparently, satisfied.

We asked in our latest poll: How was Lusi at your place? And the response was fairly underwhelming.

Just under half of our respondents said they weren’t affected at all by the Cyclone, on 48% – while under 1 percent told us they’d had damage and loss as a result of the storm.

We know now that the reason for that was the low actually missed the greater part of the country by the smallest of margins – and many in our comments section praised the moderate nature of Head Weather Analyst Philip Duncan’s forecast.

“Would like to offer thanks and a well done to WeatherWatch for their work over the past couple of weeks in its coverage and warnings over Lusi, sure she drifted further west than forcast and that may well have been a blessing considering the storm still packed a punch and may have caused a lot of damage had she drifted closer to the mainland.”

“We were lucky we didn’t get a direct hit in the north as more damage would have occurred. We have been dodging the bullet for a while, it’s not if but when it will happen. Keep up the good work. Cheers Tim”

For more on the rest of the season, check out Philip’s projections for March and April, or have a look at a shorter term forecast in his latest weather video, here.

Remember to keep an eye out for our next poll, coming Sunday morning!

Very adept the header, NZ version of Lucy in the sky with diamonds!