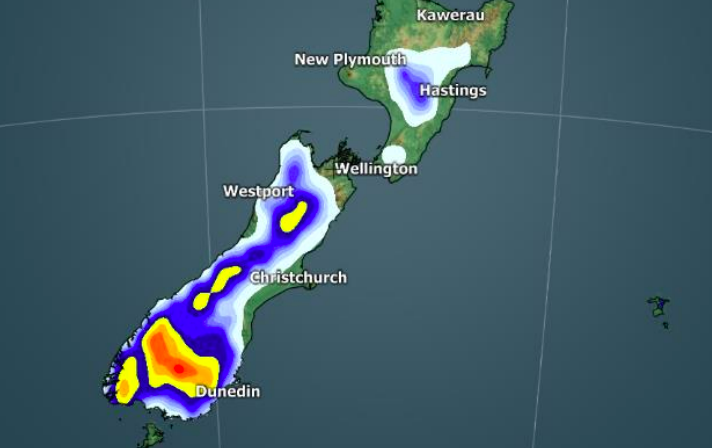 Gales, heavy rain and mild conditions for late June will impact NZ this weekend with a polar change on Monday to Wednesday spreading right across the country.

Snow is possible to sea level for a time in parts of Southland, Fiordland and Otago with heavy snow on the ranges and hilltops.

Wind chill may be the main problem for many southern farmers with livestock exposed to sub-zero daytime temperatures in the wind around Southland and Otago and potentially Canterbury’s high country.

SNOW:
WeatherWatch.co.nz and RuralWeather.co.nz forecasts will show the snow icon if snow is quite likely to fall. Sometimes searching for nearby places may help you work out where the highest risks are for snowfall.

Places most likely to get snow:

Canterbury does have snow risks but the wind flow at this stage still looks mostly dry. Snow flurries are possible on the Canterbury plains, but accumulation looks very low and short lived at this stage. Please do keep up to date with forecasts as small changes in windflow can bring in more places exposed to snow.

WINDCHILL:
While snow is a concern for some farmers (and motorists too) it’s the windchill that may be more of an issue for livestock. Both islands are impacted by the cold, starting Monday in Southland and peaking in Northland by Wednesday morning.

MetService Warnings – Can now all be found on the WeatherWatch website: www.weatherwatch.co.nz/maps-radars/warnings/metservice

– Will it snow at my place?
– How cold will the windchill be?
– How much rain is coming?
– What’s the chance of frost?
– All these questions can be answered at www.RuralWeather.co.nz – we have NZ’s largest weather data website and are NZ’s most local weather forecaster.