Polar Blast: Incoming windchill colder than the North Pole for some in the South Island (+14 Maps) 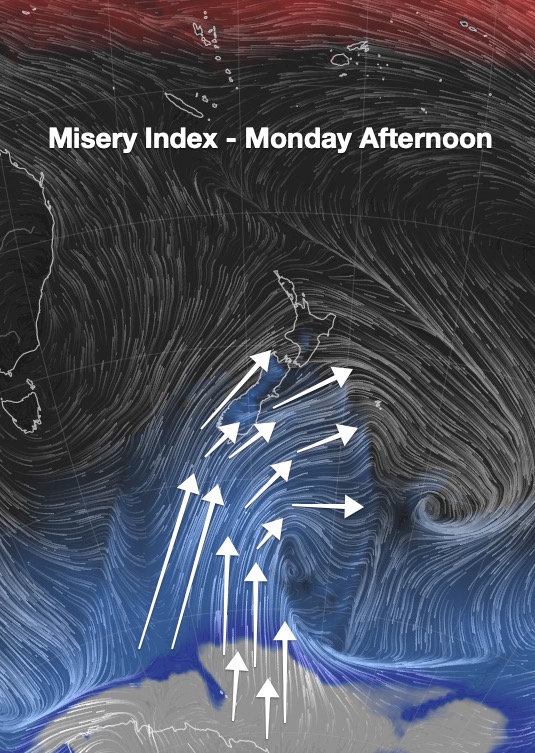 UPDATED 4:19pm Sunday — Windchill of -20C is forecast through the Southern Alps, -10C for higher elevation farms and down to -5C in some coastal parts of Southland and Otago over the next 48 hours as a significant winter storm moves through.

SNOW:
Snow will fall across both main islands with some sea level snow flurries possible in Southland and Otago – although only low accumulation is expected at sea level (if any at all). Higher up snow becomes heavier with around half a metre possible on the ranges. Farms most exposed to snow that may settle and accumulate will be over 100 to 200m with heaviest falls likely above 400m.

Totals vary from less than 1cm in low lying areas to 50cm on the ranges.

Southland, Fiordland and Otago are most exposed to some snow, along with Central Plateau and the highways in these regions.

Canterbury has some snow chances, but any precipitation (be it snow, sleet, hail or rain) looks to be fairly low accumulation-wise there due to the direction of airflow.

While snow is likely to cause some headaches, especially for motorists and some farmers, we feel that the windchill poses more of a threat to livestock.

The forecasts at WeatherWatch.co.nz and RuralWeather.co.nz will carry the snow icon if snow is highly likely to fall and settle so if you’re curious about where snow is most likely simply search various locations further inland.

WIND CHILL:
The coldest air arrives on Monday, especially Monday PM with temperatures really dropping on Monday night and into Tuesday morning across the South Island and into the North Island. The coldest air reaches northern NZ on Tuesday PM/Wednesday AM.

This is an Antarctic blast and southern NZ is most exposed – although all of NZ will have a temperature drop.

Coastal parts of Southland and Otago will have windchill hovering around freezing on Monday afternoon with -5C possible in more exposed coastal areas, such as around Dunedin/Coastal Otago.

As you go inland and higher elevation the windchills become much more extreme with exposed parts of Northern Southland and the hills around Otago down to -10C on Monday night, this is colder than the North Pole is right now (windchill around -6C). Granted it is the North Pole’s summer now, but NZ isn’t exactly polar so this is still quite significant. (Also, the windchill at the South Pole right now is -70C!).

The Southern Alps will see wind chill of -15C to -20C on Monday night and Tuesday morning and for the southern half of the West Coast the angle of attack for winds may make some valleys well below zero with windchill. From Hokitika northwards a somewhat ‘milder’ wind should come off the sea. Livestock even on the West Coast should be protected from the bitterly cold air that may come down from the Southern Alps, especially south of Hokitika.

DETAILED FORECASTS + WINDCHILL CALCULATOR:
www.RuralWeather.co.nz has HOURLY weather data for every single part of NZ for 10 days out. You can see windchill in graph form, rain graphs, snow icons (when snow is highly likely), barometric pressure (data and graphs) and wind speed, gusts and direction, plus hourly temperatures and we have the NZ Frost Forecaster.

METSERVICE WARNINGS
Can now ALL be found here at WeatherWatch. More warnings are likely to be issued today, so please click the link above or image below for the very latest.

Normal winter weather for this time of the year