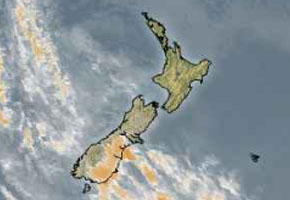 Have to say the weather is quite nice in Christchurch today, conditions are very still and temperatures currently around 15 or 16 degrees in the city. Nice for a winters day.

Cloud is moving onto the east coast north of Auckland as easterly winds develop. Sunny in most other areas of the North Island with light winds after morning fog burnt off although cloud is moving onto the coast south of Taranaki as north to northwesterly winds develop there, a slim chance there might be some drizzle from Taranaki southwards this evening. Temperatures are currently around 14 degrees for most places, north of Auckland there are 15 and 16 temperatures showing. In the Central North Island readings are quite cool, sitting on high single figures or just getting into double figures.

The South Island still has plenty of high cloud east of the main divide, Christchurch while nice now may cool down a little as high cloud looks like thickening this afternoon. North of Christchurch and through to Nelson skies look to be clear and sunny with some thin high cloud. Some West Coast places are actually quite sunny which is nice, although cloud still hampers Fiordland with drizzle patches. Southland has a northerly breeze and some high cloud also.

Temperatures are hitting around 12 or 13 degrees from Timaru southwards, north of Ashburton most places are getting into the mid teens. Westport is currently on 14 degrees.

Hey the W.W
we getting anymore snow this winter down here in christchurch?
cheers

Hi there – no snow in the forecast for the rest of July but we still have high risk for snow to sea level over August and September (but nothing specific, just a general high risk).