Pilot’s takeoff: ‘how big are his gonads?’ 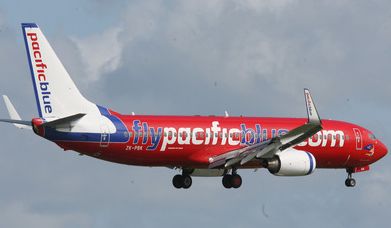 Thirty seconds after Pacific Blue flight 89 took off from Queenstown, a Fire Rescue Service member called the control tower asking: “How big are his gonads?”.

The telephone conversation was played yesterday during a defended hearing in the Queenstown District Court for the pilot of the flight, a 54-year-old Auckland man who has name suppression.

He faces one charge, before Judge Kevin Phillips, of operating a plane carelessly at Queenstown on June 22, 2010. The charge was brought by the Civil Aviation Authority in April last year.

CAA counsel Fletcher Pilditch asked Mr Palmer what he meant by “I haven’t seen this before”. Mr Palmer said “possibly I hadn’t seen a Bluebird [Pacific Blue aircraft] take off in those conditions maybe”.

When asked by defence counsel Matthew Muir if he knew Mr Henderson socially and the conversation was a “bit of back chat”, Mr Palmer replied: “correct”.

“The Pacific Blue crew decided to wait … about an hour.”

Any decision regarding the weather was the pilot’s, he said.

At one point the crew advised it was happy with the cloud level, but there was a prevailing cross wind and reported the airline had a “maximum cross wind of 16 knots”.

Moments before the plane took off the crew requested a wind check.

Mr Sakareassen said it was 17 knots gusting 28 knots and the wind speeds were “not steady”. “At 5.24pm take off clearance was given, with wind gusts at both ends [of] 25 knots.”

The aircraft taxied and there was “nothing unusual” about the take off, he said. “I was comfortable it would complete a normal departure.”

In an email the next day Mr Sakareassen concluded it was “worthy noting that conditions were the best they had been in the last hour at the time Pacific Blue 89 departed”.

Queenstown Airport’s former operations manager, Daniel de Bono, told the court he had witnessed some “interesting departures … however, I have never seen anything like Pacific Blue’s flight 89 departure … at that time of day, in low lighting conditions”.

“It seemed very unusual, we were surprised the aircraft took off and [were aware] that it was probably not going to be the end of this incident.”

* Mr Palmer later said the pilot of the flight was “committed”.
* “He’ll be gone … he won’t be coming back”.
* Mr Henderson said “he’s got some balls”.