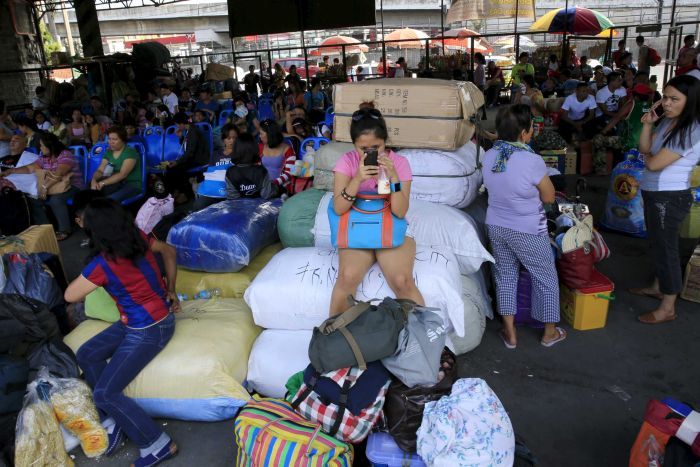 A powerful typhoon has weakened after making landfall in the Philippines’ north-east as a “super typhoon”, before moving further north-east from the mainland.

Meteorologists said the typhoon slowed just before it reached the Philippines’ north-eastern coast, where it made landfall on Sunday afternoon.

The eye of the storm has now travelled 100 kilometres north-east of Aparri, towards the Balintang channel.

Officials warned of landslides and called on residents along the coast to evacuate to safer ground.

“We strongly advise pre-emptive evacuation while we still have time, and we expect there will be a confluence of events â€” a high tide, heavy rainfall in the mountains, the possibility of a storm surge and strong winds,” national disaster agency head Alexander Pama earlier told a news briefing.

“Even as we speak, our armed forces are already moving … to help in the evacuation.

“So too are our police forces who are conducting evacuations in their municipalities.”

The typhoon was expected to trigger landslides, flash flooding and storm surges of up to two metres in parts of the Cagayan Valley, the weather bureau said, adding that heavy to intense rainfall was likely within the typhoon’s 150-kilometre diameter.

The disaster agency said there could be landslides in at least 21 areas of Santa Ana in Cagayan Valley province and nearby Gonzalo town.

More than 5,000 passengers and about 100 vessels were stranded in various ports in the country as of Saturday, mostly along its eastern seaboard.

The government readied trucks to ferry people away from low-lying and flood-prone areas.

In Taiwan, which is also in the storm’s predicted path, authorities warned sailors of strong winds and high waves and evacuated almost 1,000 tourists from an island off the south-east coast.

“It is the strongest so far this year.”

An average of 20 typhoons cross the Philippines each year, with the storms becoming fiercer in recent years.

More than 8,000 people died or went missing and about 1 million were made homeless by Haiyan, a category-five typhoon that struck the central Philippines in 2013, bringing five-metre-high storm surges.