Home > News > Philip Duncan: What happens next with Cy...

Philip Duncan: What happens next with Cyclone Pam after Vanuatu? (+4 maps) 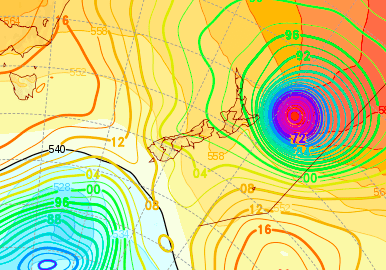 “It was worse than worse case scenario for us all” was part of the message a friend of mine, and business owner, from Vanuatu wrote on Faecbook Saturday morning to his friends.  The worst case scenario was a direct hit from Super Cyclone Pam hitting the capital Port Vila – with winds averaging 280km/h and gusting over 330km/h.

Tropical Storm Pam today continued to meander south – but will start to encounter slightly cooler waters and air soon – that plus hitching a partial ride with the jetstream (a super fast moving current of wind at high altitude that moves from west to east) which we think should start to curve it’s movement more south east.

All reliable models continue to paint this picture over the next 24 hours.

Late Saturday night NZT Pam was past eastern New Caledonia and now her overall movement will speed up – which is better news for New Zealand as it means the low is less likely to linger – the longer it stays the higher the damage.

So what about damage in New Zealand from Pam?

As I went into great detail about in Friday’s Herald weather video, the exact path of the damaging/severe portion of the storm is still hard to lock in.  However it’s fair to say that the majority of reliable international data available does suggest damging winds, incredibly rough seas and heavy rain could affect East Cape and Gisborne, also eastern BOP and northern Hawkes Bay. Still not locked in, but these regions would be deemed “moderate to high risk” by us.

While the rain looks heavy we feel that the depth of air pressure means that winds and wild seas will perhaps be the biggest concern (the deeper/lower the air pressure goes, the stronger and longer the windy weather is). Much of the torrential rain will fall in the south eastern quadrant out to sea.

The jet stream is hopefully going to help guide Pam just to our east – it certainly looks likely on Monday to help give Pam a push further east of the country by the end of the day.

So severe weather risks for NZ start late Sunday night and go right through Monday in the north east – generally speaking (rough weather may linger longer for some – but the most intense part overall does look to be Monday itself in the north east of the country).

Many of you in Northland, Auckland/GBI, Eastern Waikato, Coromandel Peninsula and other bordering regions have been asking us if you will get a direct hit.  When we consider the data we’ve seen across the entire week it still points to these areas not being so badly affected as those who are further east.  But it definitely is a storm to watch very closely – as it will not be dying or ‘fizzing out’ before it gets to New Zealand…the question still remains “how close to land will the damagaing portion of weather wrapped around the centre of Pam get to us late Sunday and across Monday”.

While Pam will no longer ‘technically’ be classed as a “tropical” cyclone it will still, in essence, be a cyclone with very similar hallmarks.  We’d imagine it will have Cat 2 or 1 strength as it moves past us – but that really describes the damaging portion around the centre of the low, the part that we think could brush and therefore hit north eastern parts of the North Island.

For those who are on the outside of this damaging belt of the weather, conditions are usualy no worse than our usual unsettled weather. But with something so serious rushing towards us it’s important all New Zealanders are up to date with conditions across the country.

Now NZ plays the waiting game…
Today the focus must remain on Vanuatu – this has been a devasting, historical, direct hit storm for them. While I cannot confirm the reports from my Vanuatu contacts, and others online this morning, they do mention houses and complexes being destroyed, many roofs gone.  If you’re in Vanuatu and safely can contact us please do post a comment and let us know how things are where you are and what you’ve seen/heard over the past 12 hours.

As for New Zealanders concerned about the impacts of Pam – now we play the waiting game.  The next 24 hours will be free from frequent updates as Pam starts to move away from the islands and truly out into the open waters between us and the tropics where there are few weather stations and new things to report.

So we’ll just be watching it spin – and watching the various models frequently continue to place it closer to NZ one update, further east the next.  There is no point in creating new news updates with each shift in the models…it will do your heads in as it can switch back and fourth a few times a day. It’s our job as forecasters to try and find the most likely middle ground between all the various changing models and data – so we’re going to closely monitor Pam today, and all the shifting computer models, and then on Sunday we’ll be able to really lock in more detailed, more precise tracking – and, we’ll step up our news updates at WeatherWatch.co.nz.

Like we’ve done in the past – we love to answer all your many many questions, but the day or two before a big storm goes by they can be a distraction to us, as we’re often repeating ourselves in answers.  If your question is “will it hit….” our answer is in the body in this news story/blog. We either know with higher confidence the regions mentioned – or we’re still waiting to confirm. If we’re still waiting to confirm it means we don’t think there is currently a high risk where you are, based on all the available facts and data on the day and the days prior.  Please also check MetService for the latest warnings, watches and outlooks.

WeatherWatch.co.nz’s focus this weekend remains mostly on northern New Zealand, mainly Waikato to Hawkes Bay northwards – but once Pam moves in and past the very north we’ll be shifting our focus further south.

So Sunday is the day our coverage will step up – we’ll have another update again this evening but check back across Sunday, especially in the afternoon and evening, for full coverage. Our team is working all weekend day and night to cover this storm.  P.S. If you’re going to the Eagles in Auckland on Sunday, we are still trying to lock in the forecast… but perhaps take a poncho as the risk for showers or even some patchy rain does increase later in the day. 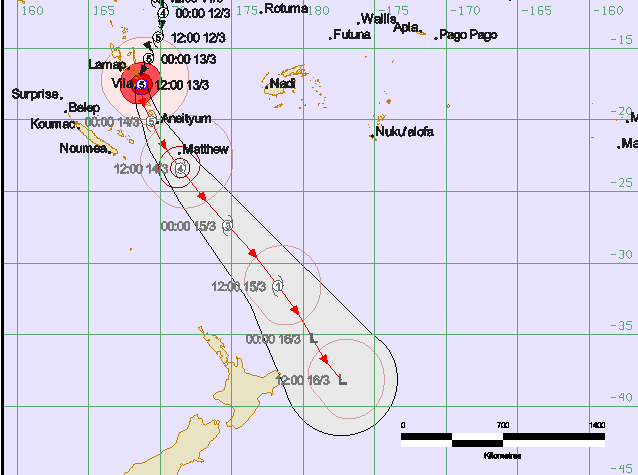 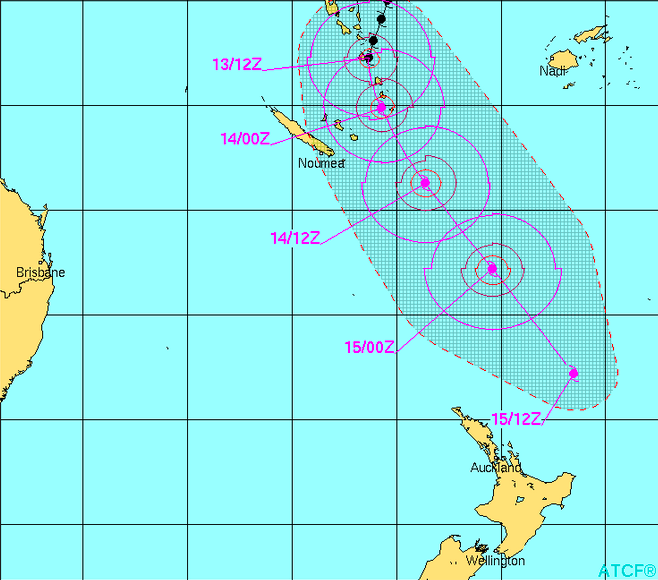 Latest tracking from JTWC (US Govt) – keep in mind they track tropical storms – so their map stops where the technical ‘tropical’ portion of the storm is no longer there – but the storm continues on after the final date in this case. 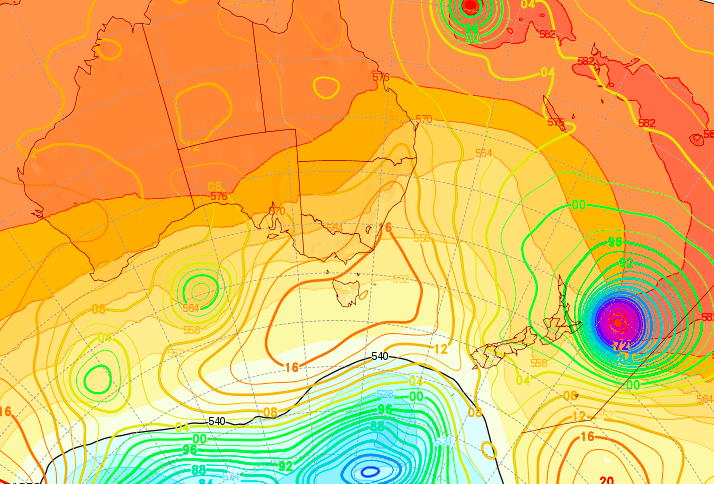 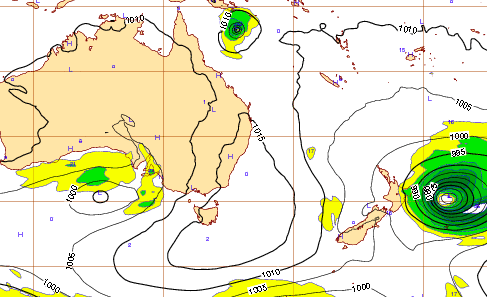 We’re all holding our breath out here on Waiheke (and buckets) – hasn’t rained here in what feels like 3 months and 90% of people here are on tank (rain) water… so please PAM, some rain but no wind.

Yes, agree with the other comments – definately the best weather reports in NZ.  The only one I trust 🙂

Thanks for the detaiiled explanations.

You guys do such an extraordinary job of calmly and concisely describing the situation in terms that lay people can understand.  This is the most informative thing I’ve read so far, thank you! 🙂

Great site- thank you.What do you think Hastings will be in for, please?

We’ll have details on Sunday morning.

Thanks for the kind feedback 🙂

Hi,
I’ve been eagerly reading your great updates, are you able to say how or if this is going to affect flight travel to Fiji or the Cook Islands on Sunday evening, Monday morning? I’ve seen flight delays today changed to tomorrow, but am flying on Monday morning and just wonder if reschedules are likely? (From auckland)

Hi there, at this stage we don’t expect international flights to be affected in and out of NZ, however, there is a chance that as the centre of the low moves close by some flight times might change. Totally over to the airports, the pilot and the weather at the time of flying. Keep up to date with the airline and airport websites, hopefully all is ok. Have a good flight!

Excellent post Philip, you guys have by far the best weather analysis in NZ.

Thanks very much Anthony, we really do appreciate that 🙂

Hi Guys. How badly will Napier be affected? Could you please advise me of the worst case scenario and is it worth prepering for the worst on Monday & Tuesday. I guess the main question i am asking is; Will napier get flooding and severe gales? Thanks. Jacob.

Hi Jacob – you should be prepared regardless of if a storm hits..ie, 3 days of water and food per person and per pet.  Napier is on the edge of the severe weather – worst case for Napier would be 24 hours of torrential rain and gales with some flooding and wind damage.  Likely case isn’t quite as extreme based on current data. Keep up to date with MetService warnings for Hawkes Bay.