Home > News > Philip Duncan: Is our weather pattern be... 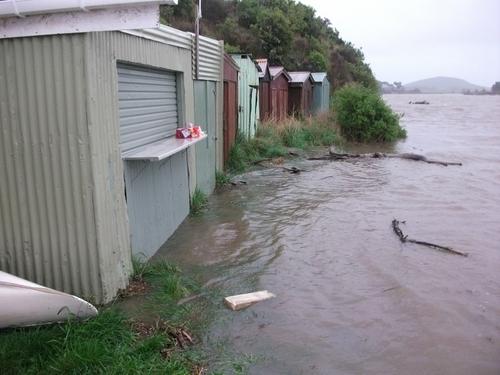 It’s hard to sit here in the depths of winter and talk like the worst of winter is over… but it’s quite possible that it is.  At least as far as the coldest weather goes.   The coldest weather is typically the six weeks or so after the shortest day (which was June 21st this year) however since that date we have seen day after day of daily highs hitting 17 and 18 degrees.

Yesterday was another warm one with 18 degrees recorded in Auckland, Whangarei, Kawerau and Westport.

OK so not everyone is feeling the warmth.  Alexandra only reached 2 degrees yesterday and 3 the day before.  But there appears to be an invisible shield over the South Island that is stopping the cold winter air from advancing northward and keeping the warm air over the North Island – and in yesterday’s case, along the West Coast also.

For the past week or so the weather pattern has shifted into what looks more like a spring weather pattern, but it seems far too early.  Fronts quickly crossing New Zealand from the west and one of the biggest tell-tale signs – an increase in winds from the westerly quarter.  Whether that’s nor’westers or sou’westers – and more often than not a combination of both over a short period of time.

The long range maps for the rest of this month show this very weather pattern.  A strong south to south west flow developing early next week, then most likely shifting to westerlies or nor’westers by the weekend in the South.

Snow storms are possible well into Spring so one would be foolish to say “that’s it, it’s downhill to summer now”, but as every day ticks by, and the days gradually get longer, the likelihood of a prolonged, significant, snow storm certainly reduces bit by bit.

I think we are in for an early Spring this year.  At the end of Autumn WeatherWatch.co.nz’s long term prediction for winter, based on the current weather patterns, was that the first two months of winter would be warmer than average for most, especially northern New Zealand.  For August I see no reason why this pattern would change.

The question now is – What will spring hold?

Well, spring is always a wild season full of variables.  Those in the east of the North Island will be wanting nor’westers and drier weather.

Many farms in Hawkes Bay have already had their annual rainfall in just 7 months.  Will those figures naturally even out?  Indicating dry westerlies for many months.  Or will the rain clouds keep blowing in on the south easterly making 2010 a record challenging wet year for them?

Either way, 2010 is certainly giving us some clear regional differences weather-wise.  Either cold and clear or wet and warm.