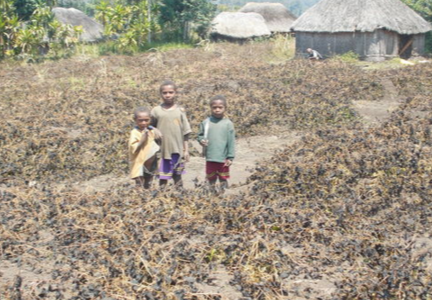 Thousands of Papua New Guineans remain at risk of malnutrition and disease because of the lingering effects of drought, aid groups say. It is unclear how many people have died, but a teacher in one village told the ABC five people including children lost their lives, and another said locals felt forgotten.

Since the middle of last year, PNG has been experiencing its most severe El Nino-induced drought since 1997-1998.

Rain in many parts of the country helped fill waterways and replenish some of the subsistence crops villagers rely on for food, but aid groups and researchers have said the rain also triggered a dangerous phase of the drought.

Australian National University agricultural scientist Mike Bourke said more people died after the rain came than during the drought because they started farming again while weak from malnutrition and disease.

“It’s when things get most difficult for people. People still don’t have food just because it rains,” he said.

It is unclear how many people have died as a direct result of the drought, because many deaths in small villages are not formally recorded, and because mortality rates are already high in PNG’s remote areas.

However, churches and health centres have reported an increase in deaths from malnutrition and disease in smaller communities that they directly attribute to the drought.

Disaster coordination worker with the United Church in Hela Province in the PNG Highlands, James Komengi, said children in particular were still suffering from the drought’s effects.

“We are seeing little kids in classrooms telling us they are fainting, and diarrhoea is common because they are eating wild foods as well,” he said.

The ABC visited Ikumdi, in Gulf Province on the southern edge of PNG’s highlands.

Villagers said three children and at least two adults had died from lack of food or from drinking contaminated water.

“Three students from the school lost their lives from those diseases,” Ikumdi schoolteacher Samuel Alphias said.

Aid groups have been trying to cushion communities against the worst impacts of the drought, but have been restricted in how much food they can provide by the PNG Government, which said it wanted to handle food distributions itself.

Those Government distributions have not reached every community, particularly villages in isolated and hard-to-access areas.

Numerous reports suggest the food has largely been distributed to provincial centres or places that were easier to access, with smaller, isolated communities missing out.

Sally Lloyd, who grew up in PNG’s Western Province, found severe food shortages in a number of communities when she returned to visit friends.

She said none had received any food aid until she made a public appeal for help.

“They mentioned that a number of times and they wanted to know why.”

Aid group Care International has been distributing some food Ã¢?? tinned fish Ã¢?? to certain communities, and is also providing water and sanitation supplies to many more to villages in Morobe, Eastern Highlands, Western and Chimbu provinces.

The charity’s emergency response coordinator, Blossum Gilmour, said communities had been through a long period without enough food, and were still struggling to get clean water.

“Most places are not suffering water shortages now but the water quality is continuing to be very poor,” she said.

“There’s a lot of dirt in the water so the water purification tablets and water containers are very welcome.

Ms Gilmour said the rain had allowed some communities to begin recovering.

“We’re finding they are in the early stages of recovery. They have planted, they are starting to see some food come back,” she said.

But some communities, particularly in Western Province and the high-altitude parts of Enga Province in the highlands, are still reporting severe food shortages.

Ms Lloyd, who is visiting Western Province again to check on villages, said the lack of food was a serious problem.

“Just because you don’t see these people, because the rains might have returned and things are green, it doesn’t mean they’re OK,” she said.