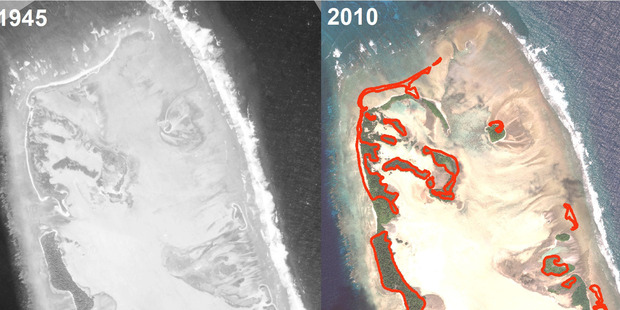 New research has shown the remarkable rebirth of a Pacific atoll devastated by a typhoon over a century ago.

The University of Auckland study, published in the journal Geomorphology, highlights the dynamism of island systems of the Pacific over relatively short periods of time.

Dr Murray Ford and Professor Paul Kench investigated the changes that have taken place in Nadikdik Atoll, in the southern Marshall Islands, since 1905, when large sections of reef islands were overwashed and destroyed following a major typhoon.

Aerial images of the island had shown significant recovery even between the end of World War 2 and 2010.

In the space of just 61 years, one island grew from an embryonic deposit to a full vegetated and stable island, while a number of previously discrete islands had agglomerated and formed a single larger island.

“The storm obviously generated huge amounts of sediment and threw up large amounts of coral on to the islands, which has helped them to re-organise themselves.”

In effect, new islands had been formed on the sites of previous ones.

“They change, they move, they shift – you’ll have a period of erosion on one part and a period of accretion on the other.”

Dr Ford, who lived in the Marshall Islands for three years, said the changes were rapid and indicate that reef island formation can occur quickly.

“Evidence suggests that despite the typhoon occurring over a century ago the geomorphic adjustment of islands is still on-going,” he said.

“The take-home message is really that a high magnitude event can both destroy the islands, and set about a series of processes that enables them to return.”

By better understanding the complicated and dynamic nature of island formation, scientists would better under stand their response to sea level rise as the globe warmed, he said.

The study is part of wider work by the university investigating the geomorphology of Pacific islands.