Outlook for Saturday, Taranaki still in for heavy rain Sunday 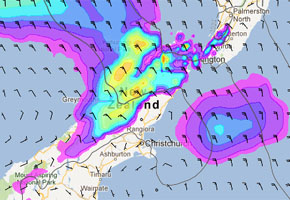 The start to the weekend in the South Island isn’t looking to good unless you live on the east coast in Marlborough.

Expect heavy rain on the West Coast north of the Glaciers with breezy north to northesterly winds, rain won’t be as intense further south and winds will be lighter. Cloudy about Southland and Otago with rain or showers, winds will be variable at times however mainly coming in from the northerly quarter. A few showers or rain patches about Canterbury with light southwesterlies tending northerly later in the day.

On the east coast in Marlborough winds will be gusty from the northwest with high cloud and temperatures will be mild in the afternoon. It should remain dry mostly on the coast itself although watch for a rouge shower spreading off the ranges at times, further inland showers will be spreading over from the west. Nelson can expect rain to develop during the morning with increasing northerlies, heavy rain at night in the northwest Nelson ranges.

Mild weather on the east coast of the North Island tomorrow with light winds freshening from the northwest at times, also some high cloud. Northwesterlies will be gusty about Wairarapa however. Cloudy in the west from Wellington up through to Taranaki with increasing north to northwesterly winds, showers at times becoming more widespread by evening. Cloud building in all other areas with increasing northerlies, a few sunny periods still possible though. There is the chance of a light shower later in the day from the Waikato northwards.

Taranaki is still looking likely to get heavy rain on Sunday then easing midday Monday as a westerly change develops, mainly in northern areas of the district. Totals of 200 to 250mm are possible about Mount Taranaki. Winds will also be strong, gale force northerly winds are likely especially in the later half of Sunday and early Monday on the coast.