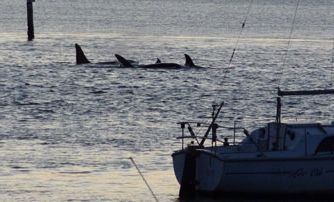 A pod of killer whales has been sighted close to shore in the eastern bays of Auckland Harbour today.

The pod of at least eight orcas halted traffic on Auckland’s Tamaki Drive as onlookers flocked to watched them swimming only 15-20m from the shoreline. 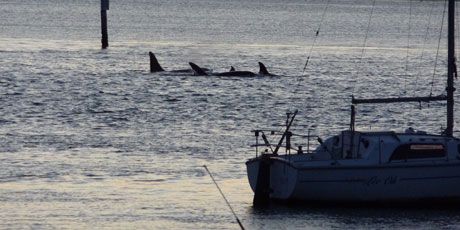 The orcas, which were sighted around midday, included two calves. They were also sighted by an Auckland Coastguard boat and Westpac Rescue helicopter, both en-route to jobs.

A spokesperson from Fullers Ferry services, Lucy Farrington, said it is always exciting for passengers when orcas come into the harbour.

Ms Farrington said the pod swam past the Hilton Hotel around 2pm and was now located at Birkenhead.

It used to be said if you see dolphins it was a sign of a storm approaching. In ancient times they were a sailor’s warning. It was also said that they swim towards a storm, maybe to get fish that are swimming away from turbulence. I assume it would also apply to orcas. Maybe the Auckland rough weather that has just followed the orca sighting strengthens this folklore.

Orca come into both auckland harbours from time to time to get stingrays
I have not seen any correlation with weather patterns in the past
I think this was just a coincidence.
Its more likely due to a warming of the waters with the lots of sunshine during the last 3 weeks of Oct. They was a pod on the west coast in weekend before last too.