On the ridge – Situation & outlook for Thursday 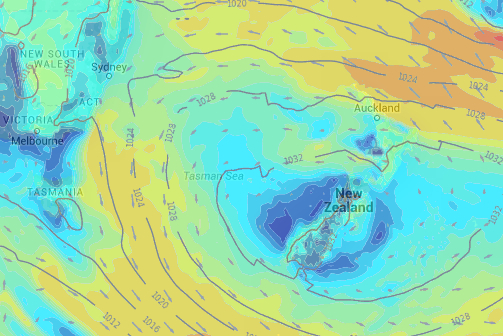 A ridge lies over the North Island for the most part, while a northwesterly airflow starts to build over the South Island – ahead of a front moving in, later in the day.

An east to southeasterly airflow develops for Northland, Auckland, and the Bay Of Plenty across to Gisborne.
These places can expect sunny areas and some cloud – with Gisborne, the Coromandel and Northland seeing slightly cloudier skies – and the odd light shower possible.

Hawke’s Bay will see some morning cloud break to a few afternoon sunny areas, and the Wairarapa will likely become mostly sunny by afternoon.

Wellington is sunny with northerlies, while it’s mostly sunny elsewhere for the North Island with light winds.

Over the South Island, it’s looking mostly sunny in the east, with northwesterly winds building inland, and gentle east to northeast winds right on the coast.
Nelson sees light winds in the morning, and then the winds tend northerly in the afternoon.

Mostly sunny on the West Coast, with gentle west to southwest winds developing by midday – while about Fiordland and up to about the Glaciers cloud increases in the mid to late morning, with a few patchy showers moving into Fiordland in the afternoon.
This will then turn to rain, as it moves in later in the evening.

Southland sees mostly sunny weather and increasing northwesterlies to start, then later in the evening a southwest change brings showers.

Otago is mostly sunny, with northwesterlies inland, and light northeast winds right on the coast about Dunedin and north Otago.
Later in the evening southwesterlies bring some cloud, and showers overnight for inland Central Otago.