Ode to the westerly 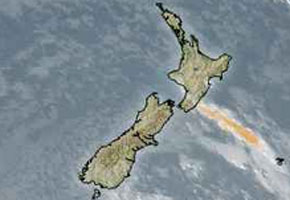 Western areas are likely to have more showery spells being exposed to the west naturally and while eastern areas will receive a few periods of showery southwesterlies these will be preceded by warm northwesterlies.

Our windows of opportunity for thundery development are likely to be Thursday and then again over the weekend later this week, however these spells may be more restricted to western areas.

Today a weakening front is moving over the North Island bringing a few showers, Hawkes Bay and Gisborne managed some sun and warmth this morning getting into the high teens however about now that will be cut down by the impending southwesterly. Gore is the coolest on 6.7 degrees but that doesn’t matter when you have huge brown trout in my opinion.

The windiest spot today is Invercargill with 55 km/h westerlies gusting to 74 km/h at times.