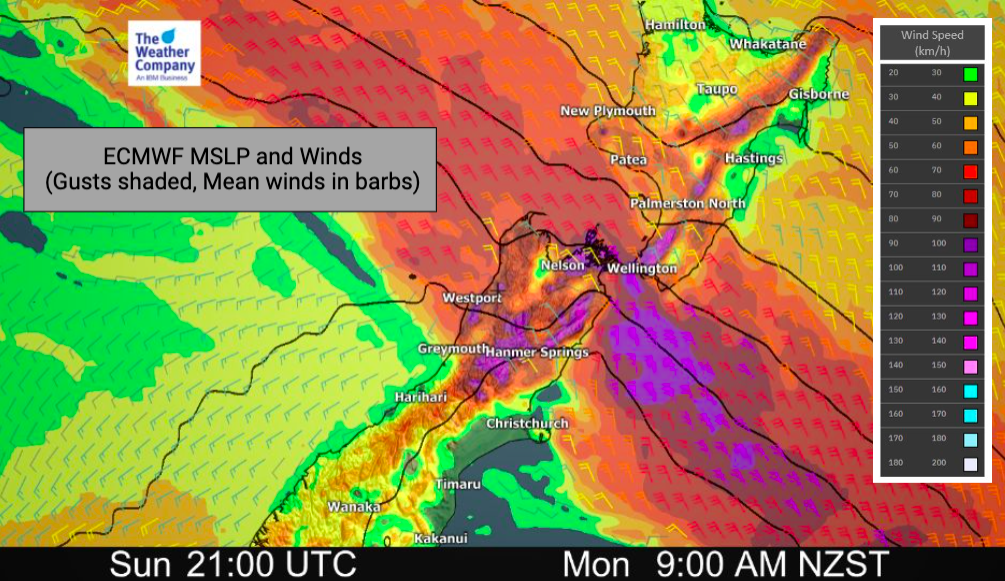 Sunday is a mild day for most regions but severe gales, heavy rain and snow all return as a colder surge of southerlies move up NZ across Monday and Tuesday.

Ahead of the south to south-west change will be windy, mild, nor’west winds. Southland will be several degrees milder today compared to Saturday, but on Monday colder air moves in and by Tuesday late-single-digit highs for many.

The nor’west winds will push temperatures up today in most regions with highs in the mid to late teens in southern and eastern areas – some places may even reach the low 20s C. But the winds will be back to gale force today, moving up the South Island as the day goes on and peaking in central NZ on Monday.

Heavy rain is likely on the West Coast and heavy snow in the mountains with a few light flurries lower down (unlikely to settle but may go down to around 200 to 300m in a few flurries around Southland, Canterbury and Otago, depending on airflow angles where you are). Widespread below zero temperatures are expected by Monday night/Tuesday morning in the South Island.

All tax funded MetService weather watches and warnings can now be found LIVE here at WeatherWatch.co.nz.

To drill down deeper locally, view the world’s most accurate forecast data (powered by IBM) at RuralWeather.co.nz. Have a great Sunday!