NZ’s late spring weather pattern may continue to mid-January, then what? 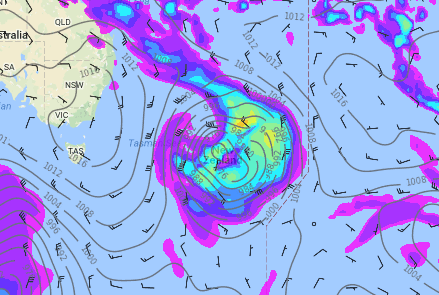 Aotearoa – land of the long white cloud. To many, the clouds are perhaps more grey than white this week. If you live in the west or south then chances are you’ve had a cloudy or partly cloudy week. Last night/this morning many have also woken to a cooler than usual day.

What’s to blame?  Southerly injections from the Southern Ocean.

Every few days we’re seeing a burst of air come out of the Southern Ocean then up over New Zealand as a south to south west wind. Today a weak cold front is heading north and some places will struggle to climb above the low teens.

Even Napier only has a high of 22 degrees today, down from the low 30s the other day…mind you, in this spring-like weather pattern it’s probably not surprising that Napier bounces back to highs in the low 30s on New Years Day and Jan 2nd.

The spring-like pattern, which is being caused by the placement and shape of the highs and lows around our small country is not really the norm in a La Nina summer. Which is why we’re saying a change is likely – and may be sudden if it comes from Australia.

At the moment Australia is facing some intense weather connected to both La Nina and the Indian Ocean Dipole (both feed wetter and warmer/more tropical weather into Australia). In the past few days there have been some intense tropical downpours including an ex-cyclone delivering record breaking rains to Uluru/Aires Rock.

This is important to note because earlier in spring New Zealand was significantly impacted by warmer than usual Australian airflows, especially in September

New Zealand – being two mountainous islands in the roaring 40s – is often dwarfed by highs and lows passing by. The current set up and shape of the highs is keeping the tropics out and the west to south west airflow alive. It’s this airflow that is giving New Zealand the odd southerly injection – bringing in cloud, wind and cooler weather but keeping many in the east sunny.

In the first week of January we may get a cold southerly that drops temperatures again – perhaps lower than today even.

However the weather in the tropics around north eastern Australia and the tropical islands north of us is heating up – storms and downpours are increasing.  Some long range models (and remember ‘long range means things can change’) is showing a potential ex-Aussie low rapidly deepening over New Zealand and bringing a storm to the country in the second week of January. But the problem with even reliable long range models is tomorrow that storm may be replaced by a high! So we have to look for a trend to form – clearly the data is seeing a low near Aussie so that’s what we’ll be monitoring. The very fact that the computer models are picking up a link to a more La Nina-like-low for New Zealand isn’t a surprise – it’s actually overdue.  Those in the north are drier than average now, the cloud and gloom isn’t bringing rain.

So while the next couple of weeks do see more of the same changeable, unsettled, weather pattern – all eyes are looking north and north west for the first signs of a break away system from La Nina affected Australia and the South Pacific tropics.

– Image / Current GFS map for Jan 9th shows a storm over the country *Please note, these long range maps can change, always use our Maps tab for the latest. Map by Weathermap