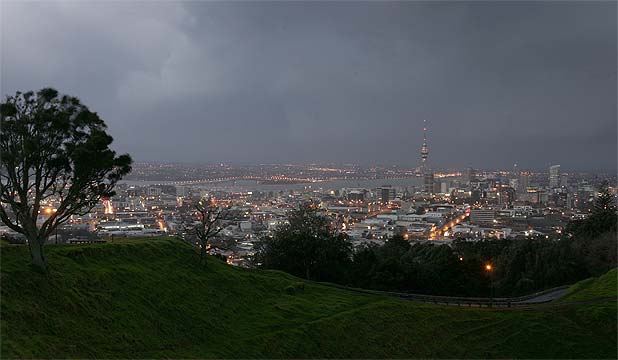 Rain has now begun falling for almost half of the country this morning and more places are likely to see the wet stuff before the day is out.

Big frosts have made roads slippery in some areas with reports of black ice in Southland, Central Otago and parts of the central North Island.Rain had started falling on some roads in Southland this morning and then freezing.

The Wairarapa has also felt the cold this morning according to our Facebook fan Helen,”Its bloody freezing in South Wairarapa. Dead calm and that grey sky that dosent break and warm up. Our ground water table is up to peak winter levels already. All the ground is so soggy. 🙁 and more rain on the way”.

Geoff in Auckland had noticed conditions throughout the night and this morning,” Was 2 degrees in Henderson at 3am, but now up around 12-13, so any frost that may have been forming last night was gone by dawn. Just noticed minutes ago it was actually warmer outside than in the house, lol. Meanwhile, the rain is now just minutes away from Auckland”.

Weatherwatch.co.nz believes the worst of the conditions in regards to wind and rain for Auckland won’t be until some point this afternoon.

Nelson and Marlbrough has seen the rain move in this morning and parts of Otago and Southland as well. Canterbury saw some rain overnight in places but more could return later today but now appears unlikely as an arch is building.

Coldest temperatures in the south are Wanaka and Lumsden with just zero degrees and Timaru is just on one degree but that temperature should climb a little over the next few hours.

Image of Auckland on a stormy day.

Wankaka ? Richard where is this?