NZ & Australia: You know it’s spring when this starts to happen… (+7 Maps) 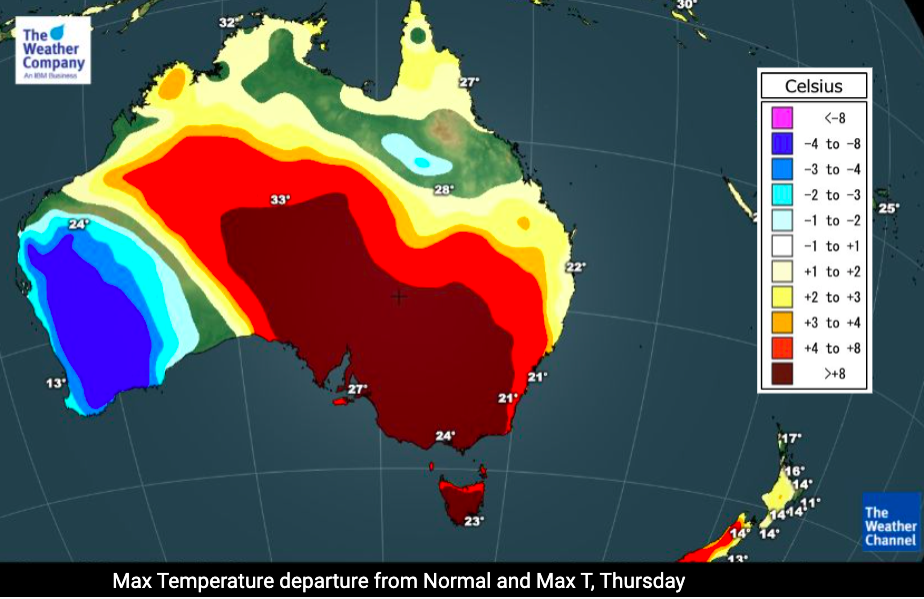 Temperatures are springing up and down across both New Zealand and Australia as September kicks in and so too does the start of Spring (at least on the Meteorological Calendar – Spring doesn’t start until September 23 this year on the Astronomical Calendar).

One telltale sign of Spring being here is seeing big fluctuations in temperatures. Powerful highs at this time of the year have great ‘reach’ – by that we mean they can reach up into the tropics and pull down mild air, or dredge up cold wintry Southern Ocean air or even Antarctic air.

This set up tends to see warm northerly quarter winds ahead of cold fronts, then windier, cooler, sou’westers.

That is precisely what we’re seeing at the moment with a large high helping bring down sub-tropical air from the Cook Islands and Tonga this weekend in parts of New Zealand, while in Australia tropical air from the north of the nation are being pulled down over the deserts and into places like Adelaide, Melbourne, Hobart and Sydney. A large portion of Aussie will be over 8 degrees above normal ahead of the front – then several degrees below normal behind it.

Perth has already experienced the cold front moving in with temperatures down today (and slowly warming back up in the days ahead as high pressure from the Indian Ocean moves in). The cold front will next sweep along the southern coastline of Australia in the next day or two ahead, reaching Sydney by Saturday, then on to New Zealand early next week bringing a temperature drop to most regions following increasingly mild days before it arrives.

New Zealand’s South Island will have daytime temperatures several degrees above normal today inland, and over 8 degrees above normal through Northern Southland, Central Otago and inland Canterbury on Friday, with that milder weather heading northwards this weekend. Around Tuesday next week the cold front from Australia moves in with a burst of rain and Southern Alps snow – and temperatures drop nationwide for the remainder of next week.

To really drill down deeper in New Zealand, visit RuralWeather.co.nz – NZ’s most accurate temperatures and most detailed data, powered by IBM.