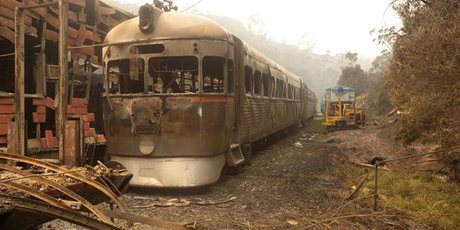 An enormous and “very volatile” fire in the NSW Blue Mountains continues to worry firefighters, with one township evacuated ahead of worsening weather this week.

Rural Fire Service Commissioner Shane Fitzsimmons says an updated weather forecast shows strengthening winds will make the situation more challenging on Wednesday, which is predicted to be the hottest day this week.

He says the focus is on the large State Mine fire near Lithgow and residents in the township of Bell are again being urged to evacuate.

“This is still a very volatile, very long, uncontained fire edge that is going to be quite susceptible to weather,” Mr Fitzsimmons told reporters today.

Monday is expected to be fairly hot across Sydney and the fireground areas with temperatures in the mid-30s, low humidity and winds around 25km/h – “nothing extraordinary but still problematic”, the commissioner said.

An emergency alert telephone warning message was sent to the community of Bell yesterday, and the Rural Fire Service (RFS) reissued the advice on Monday morning.

“The community of Bell are advised to leave now if not prepared and travel west along the Bells Line of Road towards Lithgow.”

The Lithgow Workers Club is open as an evacuation centre.

There is concern that fires in the Blue Mountains could merge to form one huge blaze that could force the evacuation of large towns.

“I don’t think I’ve ever use the word mega-fire,” he said.

“But the reality is that the modelling indicates that there’s every likelihood that in the forecast weather conditions that these two fires, particularly up in the back end of the mountains, will merge at some point.”

He said crews had “huge success” fighting the fire on Sunday and he hoped that would continue on Monday.

“The worst case scenario in the fire run with the expected weather is that it ultimately could reach down to the fire at Springwood-Winmalee,” he said.

“But with the continued success of the firefighting effort let’s hope that it doesn’t extend all that far … but we’ll still end up having a lot of fire burning.”

A state of emergency was declared in NSW on Sunday, with 56 fires still active on Monday.

Firefighters from interstate are being sent to aid NSW, and Kiwi firefighters are on stand-by to head to the state if needed.

Russell Crowe has donated $10,000 to a Blue Mountains foster father who lost his house in the NSW bushfires.

The Hollywood star made the donation from Singapore after hearing a story about Joe Moore, a man from Winmalee who cares for four foster children as well as his own three sons.

Mr Moore is a golf professional who lost his family home on Thursday and is staying at an evacuation centre in the Springwood Golf Club.

In a phone call to 2Day FM on Friday, Crowe’s manager Grant Vandenberg said the actor wanted to make a donation.

“He was just about to take off from Singapore … and to make a long story short he said please give Joe $10,000 from Russell,” Mr Vandenberg said.