Home > News > Nothing overly hearty on the agenda this... 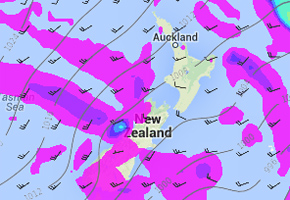 Another week approaches and it is looking fairly typical of a winters week, starts of warm today then gets colder for some especially in the deep south. Warming up again a little at the end of the week.

Monday involves warmer air over the country then on Tuesday conditions transition to cooler weather. On Wednesday, Thursday and Friday conditions are cooler across the country but there isnâ€™t a lot of substance to the few fronts that move through during this time.

For todayâ€™s weather check out this mornings national forecast
here:

Morning rain for much of the North Island eases to showers on
Tuesday, westerly winds move around to the southwest overnight. Showers
overnight may be briefly heavy for some with some hail. The east coast however
has a slightly different story, any early spots of rain clear then mostly sunny
with northwesterlies. Not till later in the evening / overnight do showers move
in with a southwest change.

The Central North Island ski fields look set to receive some snow from Tuesday afternoon and overnight. For the South Island morning rain eases to showers on the West Coast which clear by evening,
southwesterlies freshen first thing about Southland and Otago then moving into
Canterbury and Marlborough during the afternoon bringing a period of showers.  A few light snow flurries to low levels about the far south and to 400 perhaps 300m at a squeeze in Canterbury but at this stage it looks fairly tame, those temperatures will be cold though. Most Ski fields should see some snow from this front, itâ€™s nothing major but a welcome top up.

The North Island looks good on Wednesday, a good day to hit the slopes if one was inclined. Northwesterlies freshen from evening in the west however bringing increasing cloud, showers move in later in the evening /
overnight.

A mostly sunny start for many South Island regions, southwesterlies
freshen again about Southland / Otago in the morning then further north in the
afternoon bringing a period of showers. Some snow to low levels in the far south again by evening, looking like a little more will fall this time but still not a major outbreak by any means. Snow falls to 400 perhaps 300m again later in the day in Canterbury, amounts will be on the low side once again for Cantabs. Another top up for the ski fields and it will be welcome.

Thursday sees a fairly brisk southwesterly airflow across the country, showers at first for the North Island may be heavy with hail in the west then easing, sunny spells make their way through during the day too. Any
early showers clear along the east coast then mostly sunny with west to
southwest winds. Another southwest front moves across the South Island, nothing
much too it but it will bring brisk winds and cool temperatures. Showers start
off about the far south in the morning once again then moving north during the
day, showers will be fairly coastal this time round.

Finally on Friday the southwesterly windflow starts to ease, any early showers across the
country mostly clearing the sunny areas increasing. However later in the day
cloud increases in the west of the North Island from Taranaki northwards, there
may be a light shower or two for this part of the country overnight.

And here’s where the media take over and try to make a story.   This headline and text in Stuff posting this morning:

A WEEK OF WIND AND RAIN:  It’ll be a stormy week for most with heavy rainfall down south and strong winds to sweeps parts of the country.

Sadly, most people believe this stuff and will now think the forecast by Weatherwatch and Metservice was wrong.