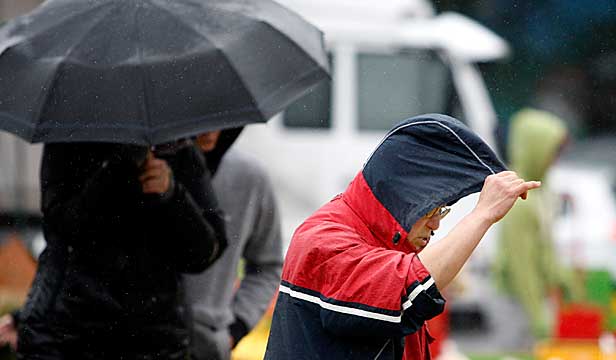 Wednesday is starting off fairly lively across some of the North Island today whereas much of the South island is looking benign in comparison.

“The remainder of the fairly complex low is still having an effect over the north but conditions should settle down in many areas by this afternoon” says weather analyst Richard Green.”it’s taking longer than we initially thought as this system is making hard work of it all but it is heading in the right direction and slowly leaving our shores”.

Auckland has started off sunny but potential showers are looming later this morning.

The wind has also been very strong with southerly gales about the lower North island and Wellington having most of the impact.The city has seen gusts clocked above 100kph about exposed areas inside the last 24 hours.Other areas such as Manawatu and also other parts of central New Zealand have seen the southerlies roar in at times.

WeatherWatch knows there are still more contents set to be unleashed this morning over some northern regions whereas a front delivering a brief sou’ west change is about all that’s going on across the Mainland.

Elsewhere the weather should be reasonably dry and settled and a little warmer than yesterday.

This morning big frosts have formed in the south with Dunedin airport down as low as minus 4 degrees and Queenstown and Wanaka sharing minus 3. Timaru has also dipped to sub zero lows under clear skies and still conditions.

“Since the drought was broken we’ve certainly had our fair share of wet fronts and lows and also cold conditions over southern districts” says Mr Green. “It’s almost like we’re making up for lost time – what we didn’t get for a few months is now taking aim at us fully and perhaps it’s not all over and done with yet as we’ve only just squeaked into winter”.

Snow fell again to reasonably low levels late yesterday about eastern foothills but not to the depth of the previous day across inland areas of the South Island however some road closures still occurred.

Wellington and eastern North Island districts may see snow about higher levels across the hills but not to the degree of last week as the raw cold hasn’t quite featured to the same degree it seems.