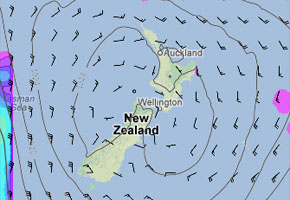 I remember last month many were crying out for settled weather in the North Island, October was bringing in quite a few northwest / southwest changes with cloud, showers and strong winds and was a tad cooler then normal. Settled weather was hard to come by. Well, from now onwards in the North Island through till perhaps even early next week those tears will certainly be drying up as an anticyclone about to centre over us tonight is set to bring some settled weather.

There will still be a few cobwebs to blow out tomorrow for some North Island areas, Northland may have an early shower any of which will clear. And during the day the east coast will have cool southerlies with the odd shower during the day which clear mostly in the evening, everywhere else will be sunny. Thursday sees sunny weather in all areas although the odd shower could still cling to Gisborne due to the airflow around the high catching the region, and perhaps the risk of an afternoon shower due to some cloud build ups about Auckland otherwise dry.

Friday will see sunny weather in most places although there could be some cloud at times between Kapiti and Taranaki. Saturday has the flow tending a little more west to southwest as the anticyclone mentioned above begins to move over the top of the country and to the east, and this is where a slight hiccup could occur. A chance of antcyclonic gloom in some western areas from Kapiti right through to Northland, sunny areas may burn through in the afternoon however. Elsewhere will have sunny skies on Saturday.

Sunday will be settled in the north also although there could be plenty of cloud about morning and night in most places, winds will be light with afternoon sea breezes in coastal areas.

As for the South Island I’ll cover this in more detail tomorrow, suffice to say conditions are looking quite settled also. A front and low combination initially tipped to approach later on Thursday is now slowly approaching in the weekend and will start to bring cloud and showers to the west and far south then. There is a slight hint that the main impact of this low may not be felt till mid next week as another high developing out east of the country later on Sunday keeps the low in the Tasman Sea.