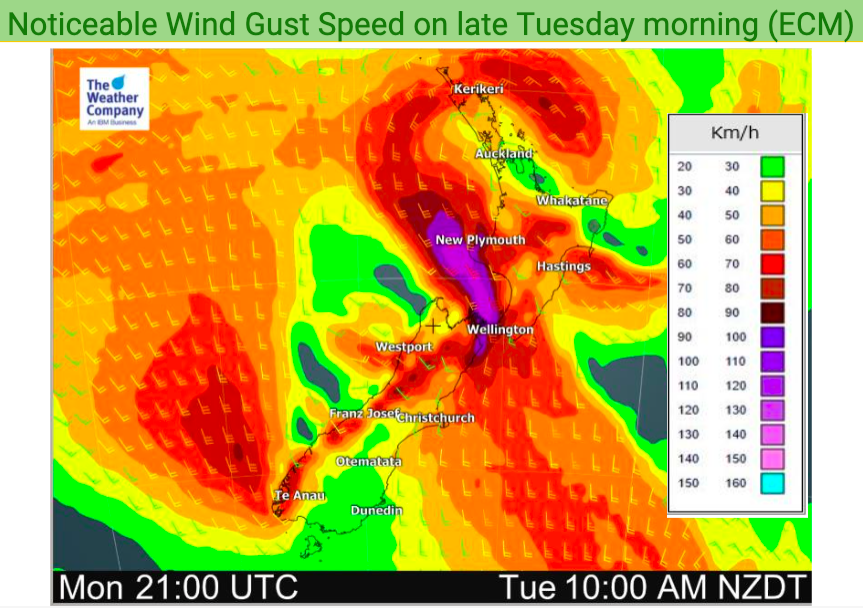 UPDATE — A sub-tropical low in the north vs a big blocking high in the south – that’s the set up for the next three days across New Zealand.

Over the next few days gale force winds, some gusting over 100km/h, will squeeze through some valleys, wind tunnels and marine areas due to the low pressure system sitting on the top of NZ.

At the bottom of NZ a powerful high remains in charge and will bring a very settled end to the week and a dry, settled, weekend this weekend.

TEMPERATURES:
Summer isn’t done, but we do have a cooler change this week which will see below normal daytime and nighttime temperatures, especially along eastern NZ and even more so in the South Island.

In fact the interactive Below Zero temperature maps we have here show frosts will impact some interior parts of the South Island with overnight lows down to near zero in many other places next few nights.

RAIN:
The bulk of the rain will fall over the North Island, in particular the north east corner of the island where generally up to 150mm is possible, with those in the south west getting impacted by the winds but not so much by the rain. Totals in Manawatu, for example, may only be 20mm over the next few days.

Dry Auckland is getting light to moderate rain today and a few isolated heavy falls. Totals vary across the region but 30 to 70mm is the most likely spread. Very positive for the city especially – but not enough to reverse two years of below normal rainfall.

We’ll have much more details in our Video Update, usually published between 10am and 12noon weekdays.