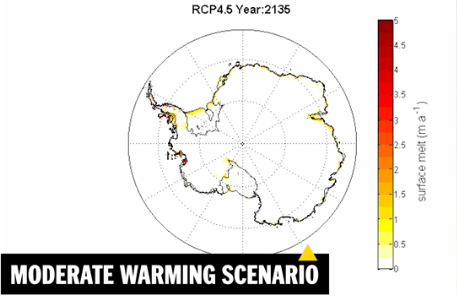 Sea levels could rise nearly twice as much as previously predicted by the end of this century if carbon dioxide emissions continue unabated, an outcome that could devastate coastal communities around the globe, according to new research published Wednesday.

The startling findings, published in the journal Nature, paint a far grimmer picture than current consensus predictions, which have suggested that seas could rise by just under a meter at most by the year 2100.

The scientists behind Wednesday’s study used sophisticated computer models to decipher a longstanding riddle about Antarctica: how did it surrender so much ice during previous warm periods? They found that similar conditions in the future could lead to monumental and irreversible increases in sea levels. If high levels of greenhouse gas emissions continue, they concluded, oceans could rise by close to two meters in total (more than six feet) by the end of the century. The melting of ice on Antarctica alone could cause seas to rise more than 13 meters (42 feet) by 2500.

The projection “nearly doubles” prior estimates of sea level rise, which had relied on a “minimal contribution from Antarctica,” said Rob DeConto of University of Massachusetts, Amherst, who authored the study with David Pollard of Penn State University.

The research already has created a buzz in the community of scientists studying Antarctica, and experts largely praised the new model as thorough and impressive, while noting its remaining uncertainties.

“People should not look at this as a futuristic scenario of things that may or may not happen. They should look at it as the tragic story we are following right now,” said Eric Rignot, an expert on Antarctica’s ice sheet and an earth sciences professor at the University of California, Irvine, who was not involved in Wednesday’s study. “We are not there yet . . . [But] with the current rate of emissions, we are heading that way.”

This is what happens when over active alarmist minds add unrealistic data into sophisticated computer models – garbage in garbage out.

Alarmists and their models, maybe release date for this was meant to be April 1st.

As University of Colorado’s Roger Pielke, Sr. said in response to the paper. “Example of climate science dysfunction, submit hypothesis as an article – find favourable ed/reviews – publish in Nature – highlight in NYT.”