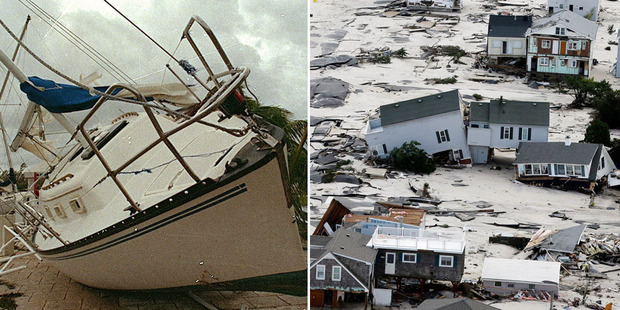 People are slightly less likely to flee an oncoming storm with a feminine name than a masculine one, a new study has found.

But hurricanes with feminine names turn out to be deadlier in the United States than their more macho-sounding counterparts, probably because their monikers make people underestimate their danger, the researchers concluded.

In fact, the two deadliest storms to make landfall in the US since 1979, when male names were introduced, were named Katrina and Sandy.

The study, which didn’t involve any experts in meteorology or disaster science, was published this week in the Proceedings of the National Academy of Sciences. Atlantic hurricane season started on Sunday, US time.

In six different experiments, more than 1000 test subjects told behavioral scientists at the University of Illinois in Champaign that they were slightly more likely to evacuate from an oncoming storm named Christopher than Christina, Victor than Victoria, Alexander than Alexandra and Danny than Kate.

“People are looking for meaning in any information that they receive,” said study co-author Sharon Shavitt, a professor of marketing.

“The name of the storm is providing people with irrelevant information that they actually use.”

Shavitt said both men and women rated female storms less scary and they both “are likely to believe that women are milder and less aggressive.”

It fits with other research about gender perception differences, she said.

Sandy, while it can also be a male name, was chosen as a female name by weather authorities in 2012.

Shavitt said it also ranked as rather feminine when she asked a small group of people to assess names on a masculine-feminine scale.

Hurricane and disaster science experts, such as Massachusetts Institute of Technology’s Kerry Emanuel, were skeptical at first. Then after more consideration some but not all found merit in the work, noting that it is more about psychology rather than physical science.

Emanuel said confusion over whether 2012’s Sandy was called a hurricane or post-tropical storm did cause confusion, so maybe names could make a difference too. He joked that maybe names matter and perhaps meteorologists should start using scarier-sounding ones like Jack-the-Ripper or King Kong.

But Susan Cutter, director of the University of South Carolina’s Hazards and Vulnerability Research Institute, dismissed the idea that female-named storms are deadlier. She considered the study results just coincidence.

To examine past death rates, Shavitt and doctoral student Kiju Jung used Shavitt’s scale that rated names from 1 to 11 in terms of masculinity and femininity. They looked at death rates going back to 1950 and found that, in general, the deadlier storms were more feminine.

However, male-named storms weren’t introduced until 1979. Only female names were used for storms from 1953 to 1978. From 1950 to 1952, military-style phonetic names (like Able, Baker, Charlie) were used and before that, there were no official names for storms.

While since 1979, female storms have been deadlier – even with the outlier of Katrina removed – the sample size is so small that the trend from 1979 is not statistically significant. But it is significant when combined with data from 1950, Shavitt said.

Also telling is that the amount of damage is not much different between male and female storms, indicating the big difference is not the size of the storm but how people react to it, Jung said.

Jung and Shavitt said one name jumps out at them for danger: Dolly. It’s considered highly feminine.

Hurricane Dolly, Cyclone Teddy, Typhoon Nana just do not sound the part, they sound like wimp storms. Hurricane Dolly sounds like a kids toy or something that sings. Applying pure science to dispute something like this is in itself unscientific. The psychology does need to be taken seriously. Most members of the public do not think in terms of pure science. I’ve seen it all over Facebook “You can’t call a storm that” and that “it can’t be very bad with a silly name like that.” It is common to see those conversations before US hurricanes and I’ve even seen NZer’s question the names of exTC’s. The USers really comment up large on the names of winter storms and why they’re called that, and they rubbish the strange sounding names. It is how I learnt about the US winter cyclones having names. Perhaps those against the research need to get a life by getting in amongst the real people.