NEW POLL: Lusi – how was it at your place? 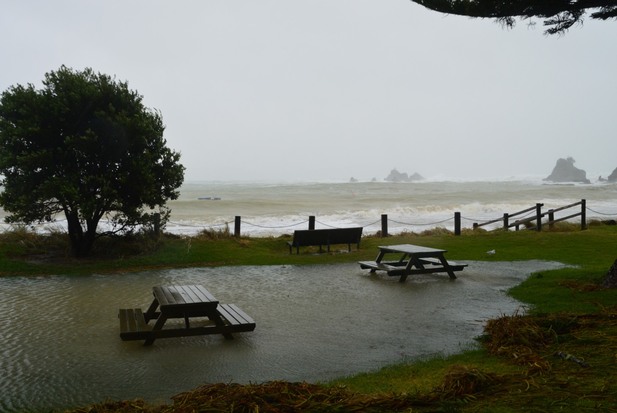 As ex-cyclone Lusi clears New Zealand, we wanted to get a gauge on how it affected our readers here at WeatherWatch.

Farmers in dry parts of the North Island were hoping for a decent spell of steady rain, while others were anxious about its effect on crops and trees – with strong gusts accompanying the rain.

There were some surprising rainfall amounts – like 100+mm in Te Aroha and 200mm in Paeroa close to the western slopes of the Kaimai Ranges.  However just a few kms west of the ranges, in Morrinsville, just 8mm fell.  Some in Hamilton reported 3mm while farmers in Northland had 100mm+.

Further south, Christchurch residents who’ve just finished cleaning up from the storm two weeks ago had heavy rain on Sunday – but not enough to cause major headaches.

So let us know how bad (or good) the storm has been at your place, and tell us where you’re from in the comments below!

not to bad. It looked impressive, anyway: Damned if you do, damned if you don’t guys.  Would much rather be prepared than not so THANK YOU for all your updates on here, FB & Twitter

We finally got belted to some extent in Whitby last night, good rain and a very gusty Nor’Wester which on many occasions did gust stronger than our “average” Nor’West gale.

Would like to offer thanks and a well done to WeatherWatch for their work over the past couple of weeks in its coverage and warnings over Lusi, sure she drifted further west than forcast and that may well have been a blessing considering the storm still packed a punch and may have caused a lot of damage had she drifted closer to the mainland.

It was nice to watch the centre of the ex TC trundle over the top of the south island last night and give us a bit of a bashing with heavy rain and a gusty wind.

At the end of the day things could well have been much more devastating and these things are getting closer.

So thanks WeatherWatch and keep up the fantastic work.

After all the hype about Lusi it was a non-event. We even came back one day early from a tramp into Cedar Flat, near Hokitika because of the weather forecasts. Shame, but you have to take notice of weather forecasts when tramping along and across creeks and rivers on the West Coast.

Agree its frustrating – but had it tracked a little further south (which was just as easily possible) then you would’ve been in the firing line.  We forecasts the risks – nothing with a cyclone is ever 100% locked in.You made the right call, even if frustrating in hindsight.

…after all the buildup and hype we had high hopes that here in Pukekohe we might get some decent sustained rain.

Quite frankly all it turned out to be was some mildly strong winds and light drizzle…even the Sun came out by Saturday afternoon!

Battened down the Hatches for nothing.

We predicted the rain could be patchy and not widespread – in fact we specifically didn’t use the word “widespread” as the others had as we never thought it would be.  Overall it wasn’t as rough as forecasters predicted simply due to the low not making a direct hit – a good thing overall but hugely disappointing if you’re needing rain.

We’ll update things either today or early tomorrow on the next chances of rain.  They had 200mm over in Paeroa – the Coromandel Ranges are one of the main reasons Pukekohe and parts of Waikato missed out on a proper soaking.

Thanks for information leading up to Luis’s arrival. I was staying the weekend near taupo bay northland for the weekend. I hired a generator on Friday . We had high winds and a bit of rain. The sea had large swells and waves. The power went off on Saturday morning at 1.00 am the power company were still fixing the lines on Sunday afternoon. We were lucky we didn’t get a direct hit in the north as more damage would have occurred. We have been dodging the bullet for a while, it’s not if but when it will happen. Keep up the good work.Cheers Tim

A good wild night with a bit of rain, NE-N mostly with decent gusts and 90 km/h blasts ex the NE. Enjoying this cos the NE is nice and cooling against the hot N. Will see what it pans out like over the next few hours. Ruggedness = comparable to a good winter Southerly. Pity it didnt strike by day.

Other than some strong gusts of wind very little to report on the outskirts of Hamilton. Less than 5 mm of rain so no drought breaker that’s for sure