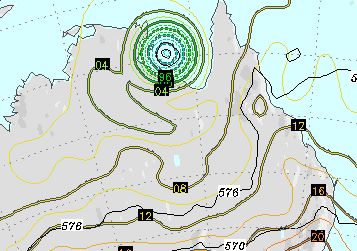 The GFS long range weather maps, used by New Zealand and Australian forecasters but produced in America, are picking that a new cyclone may hit northern Australia early next week says WeatherWatch.co.nz.

The long range models, which have been highly accurate this summer, predict a weak low will cross the northern tip of Queensland on Friday then rapidly intensify into a cyclone by Monday in the Gulf of Carpentaria.

While this part of Australia is not heavily populated the tropical storm could then head south, dumping more torrential rain on normally dry inland parts, such as Alice Springs, which is this year receiving huge amounts of rain.

Flooding from ex-cyclone Yasi has already caused problems across inland/western Queensland and the Northern Territories.

Of short term interest the Bureau of Meteorology have “high” confidence that another cyclone will form west of Western Australia in the coming days.  The good news is that the predicted cyclone is expected to travel well west of the continent and away from land.

However the long range models show plenty of unstable weather conditions along Australia’s north western coastline with one model predicting another low developing west of Darwin and heading inland at the end of next week.  Again, this part of Australia isn’t heavily populated but the lows have the potential to continue to string of flash flooding across inland regions says WeatherWatch.co.nz.