NEW: ClimateWatch – How the month of September is shaping up (+8 Maps) 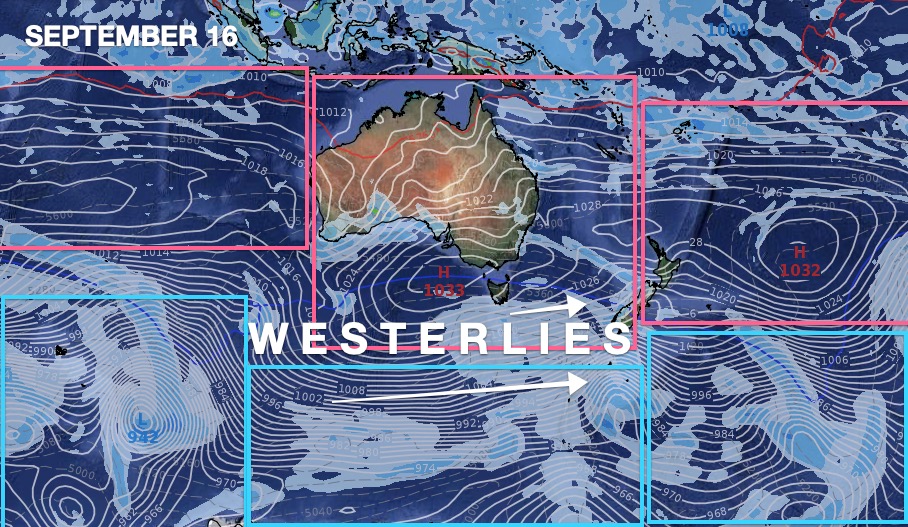 We’ve issued our next climate update for New Zealand for the month of September and it shows a classic spring pattern well underway.

It’s what we like to call an “Air Pressure Sandwich”. This is when we have a belt of highs to NZ’s north, a belt of lows to our south, and the “filling” is the windy westerlies in the middle (and yes, New Zealand is right in the middle of this air pressure sandwich!).

The westerly lean of winds will be more noticeable from the lower North Island southwards, encouraging milder and drier weather at times in the east of the South Island and Wairarapa.

Rainfall will continue as normal – or even above normal – in the places where few of us live: Fiordland and South Westland. The rainfall totals in Fiordland will be quite steep in the coming weeks and there will be some spillover further east in Southland, Otago and Canterbury. But the very eastern sides of Southland, Otago and Canterbury do look to lean drier than average along with the upper South Island.

AUCKLAND:
Not good news for Auckland’s water storage after a very positive August. In August the lows came back, the rain makers came back and the water storage dams started to fill back up again. Now our largest city faces a drier than average first half of September, with potentially has as little as 5 to 10mm falling in the first 16 days.

Hopefully in last week or so of September this high pressure belt breaks up.

It was highs drifting from Australia in 2019 that saw NZ receive drought conditions over summer and early this year. WeatherWatch.co.nz exclusively talked about these conditions in September last year. It took until May of this year for Niwa and Watercare to express real concerns about Auckland.

LATE SEPTEMBER / SPRING / LA NINA?
The further we go out the harder it is to pinpoint specific rainfall. It’s worth noting that IBM’s longer range rainfall models suggest “normal” rainfall does return to Northland and Auckland during spring.

While it’s hard to see how this will happen at this early stage, there is 70% confidence of La Nina forming according to Australia’s Bureau of Meteorology (BoM) who WeatherWatch trusts. (In NZ, sadly Government Agency NIWA is now fiercely commercially competing against MetService for clickbait climate headlines and removes Niwa from being seriously considered and quoted in our NZ Climate updates – hence why we quote BoM in Australia – as BoM is a true public resource).

If La Nina occurs and it is also a moderate to strong La Nina it could see more lows and rainmakers developing to NZ’s north. It’s not yet showing up in the weather charts, but we’ll keep you posted on further updates.

This report was made possible thanks to www.RuralWeather.co.nz (NZ’s largest weather data website) and IBM Watson (The most powerful weather supercomputer in NZ).