Home > News > Nearly there, settled weather on the way...

Nearly there, settled weather on the way 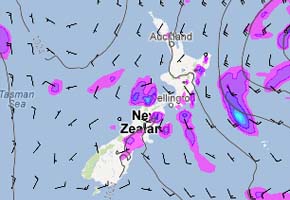 We are nearly on the way to some settled weather and some regions will be experiencing it from tomorrow as an anticyclone in the Tasman Sea moves in behind our departing low, however a few places will still be a bit damp.

Mostly sunny in the west of the North Island tomorrow with some cloud about, expect southwesterly breezes tending more southerly by evening. Cooling down at night in the Waikato and Central North Island.

On the east coast of the North Island expect cloudy skies and showers, winds will be breezy from the southwest.

Drizzle clears in Canterbury in the morning then from the Kaikoura Coast in the afternoon, sunny breaks may then show mainly in Canterbury with south to southeasterly winds easing during the day.

The West Coast will experience sunny weather with light winds, although there is a chance of some convergent showers in parts of Buller and Tasman mainly in the afternoon which will ease later in the evening then clear at night.

Sunny areas will increase about Southland and Otago tomorrow with east to northeast breezes.