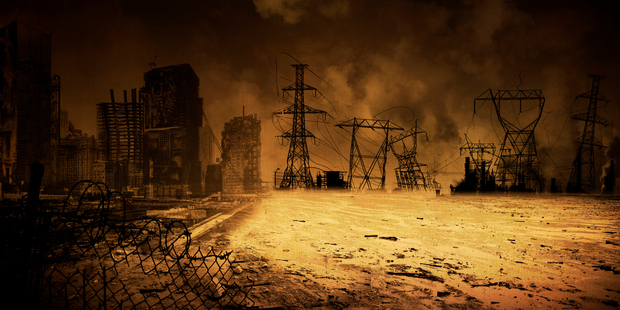 Modern civilisation is heading for collapse within a matter of decades because of growing economic instability and pressure on the planet’s resources, according to a scientific study funded by Nasa.

Using theoretical models to predict what will happen to the industrialised world over the course of the next century or so, mathematicians found that even with conservative estimates things started to go very badly, very quickly.

Referring to the past collapses of often very sophisticated civilisations – the Roman, Han and Gupta Empires for example – the study noted that the elite of society have often pushed for a “business as usual” approach to warnings of disaster until it is too late.

In the report based on his “Human And Nature Dynamical” (Handy) model, the applied mathematician Safa Motesharri wrote: “the process of rise-and-collapse is actually a recurrent cycle found throughout history”.

His research, carried out with the help of a team of natural and social scientists and with funding from Nasa’s Goddard Space Flight Center, has been accepted for publication in the Ecological Economics journal, the Guardian reported.

Motesharri explored the factors which could lead to the collapse of civilisation, from population growth to climate change, and found that when these converge they can cause society to break down because of the “stretching of resources” and “the economic stratification of society into ‘Elites’ and ‘Masses'”.

Using his Handy model to assess a scenario closely resembling the current state of the world, Motesharri found that civilisation “appears to be on a sustainable path for quite a long time, but even using an optimal depletion rate and starting with a very small number of Elites, the Elites eventually consume too much, resulting in a famine among the Masses that eventually causes the collapse of society”.

The report stressed, however, that the worst-case scenario of collapse is not inevitable, and called on action now from the so-called real world “Elites” to restore economic balance.

“Collapse can be avoided and population can reach equilibrium if the per capita rate of depletion of nature is reduced to a sustainable level, and if resources are distributed in a reasonably equitable fashion,” the scientists said.

This is not the first time scientists have tried to warn us of potentially impending global disaster. Last year it emerged that Stephen Hawking and a team of Britain’s finest minds are drawing up a “doomsday list” of the catastrophic low-risk (but high-impact) events that could devastate the world.

We need to look at our own country, as NZ is in no way exempt. Climate Change is definately here in New Zealand and it grates me when people still walk around with their heads in the clouds about it. I am in a highly orographic area of the North Island where the climate is a serious decline and is picking up momentum. I’ve started to photograph the updraft storms, but it is hard work in sub-zero wind, with polar storms coming at you from several directions. I had one blow up where I was standing this winter just gone and was showered in ice, sleet and hail, twas a shocker. It is basically a polar storm updraft literally exploding at or near ground level. What I didn’t realise at the time, was that I was being blasted by and photographing a New Zealand first with these appallingly cold storms. They’re advanced Climate Change and we’ve been blasted by them since about 2009. I learnt to recognise them on the radar through the cell expansion and low level yellow. Shame though no one else did and bigger shame on them for refusing to release their radar. MetService … you really suck for that. If I feel brave enough, I’ll go out in a full on SE this winter and try to grab some really good stuff of them.  Yes folks Climate Change is well and truly here in NZ, and it “will” be like a stick of dynamite for New Zealand due to our location. It has the potential to isolate Wellington. SH1 and the gully route are already already in big trouble … give it time. The scary thing is if updrafts start blasting up on SH1 and that is a very real possibility. Kapiti Island, that beautiful sanctuary full of precious and rare Taonga blasted in July 2013. I worry about winter to come and about how long we’ve got left here, which makes me feel impatent with NIWA taking so long, but can fully understand why and the massive implications they will be facing. Not easy. I worry about Climate Change and Transhit wanting to put more and more roads into the hills and along the coast is a nightmare. We don’t need more pollution going up into the mountains here, they’re in trouble now. This little area is all set up and poised to deal a major blow to the country. Who would ever have guessed it’d come from here, let alone in the North Island.

We need only look to the US and QE or the printing of money to keep the monetary “balloon” afloat, that will burst sooner than later. I’d also be concerned about the goal of huge corporates like Monsanto who are looking to develope their own range of GMO seeds and then have them patented so we all need permission to grow our own veges etc, they are on the way to that now. People may also want to look at the Agenda 21 being a UN sponsored programe to control us all, heard of it? No I hadn’t until a few years ago – not nice.

So basically what I’m saying is that when push comes to shove, any civilisation has its breaking point and when the population is confronted with continued rising prices of everything essencial, having controls put on their everyday activities by Fascist councils and governments, thats when the sloppy stuff will hit the fan big time, just wait and see folks, a night in front of Coro will soon be only a thought not a past time.