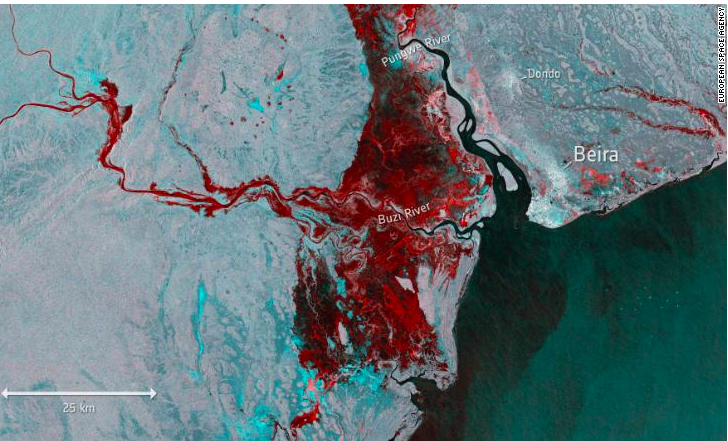 Beira, Mozambique (CNN) — As many as “300 to 400” bodies line the banks of a road out of the city of Beira in Mozambique, according to an eyewitness account, and flood waters have formed an inland ocean that is visible from outer space.

The harrowing scene, described by Zimbabwean Graham Taylor, suggests that the human toll of Cyclone Idai is likely to far exceed official estimates. It follows reports from aid agencies on the ground detailing how entire villages and towns have been completely flooded in the wake of last Thursday’s high-end Category 2 storm.
Taylor said the bodies were located on a 6-kilometer (3.7-mile) track of highway, where flood waters had created an inland ocean, submerging entire villages around a “densely populated” sugar cane plantation. The area is a mere fraction of the land in the southeast African nation left flooded after two major rivers burst their banks in the days following the storm.
The International Federation of the Red Cross and Red Crescent Societies (IFRC) said that the destruction left by the cyclone is “worse than we imagined” and warned that the humanitarian needs “will tragically only deepen in the coming weeks.”
In a statement, IFRC said that flooding creates ideal conditions for disease outbreaks.
“Already, some cholera cases have been reported in Beira along with an increasing number of malaria infections among people trapped by the flooding,” read the statement.
Flooding is so extreme in Buzi, central Mozambique, that the water can be seen in satellite images from outer space.

– An image of the flooding from the European Space Agency.
The area is home to some 200,000 people, and CNN spoke to survivors arriving at Praia Nova by boat on Friday.
One man, Abias Felipe, had arrived from the flooded village of Chikezana after surviving the cyclone. “It broke everything — there’s nothing left there,” he told CNN, adding that rescue teams had started to arrive in the area.
“They’re starting to come but there’s still a lot of people trapped in their homes,” said Felipe. “They say there’s a lot more rain to come today and tomorrow.”
On Friday 700 survivors from Buzi gathered at the Escola Secundaria Samora Machel school in Beira after they were rescued.
At a press conference in Beira, Mozambique Prime Minister Carlos Agostinho do RosÃ¡rio said the official number of people killed in Mozambique had climbed to 293, adding that “we believe that figure will rise.”
More than one week on from the storm’s initial impact, the United Nations confirmed that 259 lives were lost in Zimbabwe and 56 in Malawi.
But information has been slow to emerge and communication with affected areas remains limited. On Monday, Mozambican President Filipe Nyusi said that “everything indicates that we can have a record of more than 1,000 dead” — a figure that some experts now believe could be conservative.
The mortuary at the central hospital in Beira “is full and dozens of bodies need to be removed and handled in a dignified way,” according to IFRC. Beira is still flooded, which makes it impossible to bury bodies, IFRC said.
It is premature to say how many people have died while affected areas remain inaccessible, Stephen Fonseca, regional forensics manager at the International Committee of the Red Cross (ICRC), told CNN.
On Friday morning ICRC set up a new base in Chimoio, near the border with Zimbabwe. Fonseca said identifying victims is “a monumental task” that will take months or years rather than days or weeks. “The agony of not knowing what happened to your loved one in a disaster like Cyclone Idai is indescribable,” Diane Araujo, an ICRC delegate deployed to Beira, said in a statement. Araujo said IFRC is sending staff to Malawi, Mozambique and Zimbabwe to help families who don’t have access to phone or internet find their missing relatives.
About 1.7 million people are affected by Cyclone Idai in Mozambique, Malawi and Zimbabwe, according to UNICEF.
“The situation on the ground remains critical,” said Christophe Boulierac, UNICEF spokesperson in Geneva, describing the scene in Beira.”There is no electricity or running water.”
Thousands of people are congregating in informal camps in desperate conditions, according to UNICEF representative Marco Luigi Corsi, who has traveled to affected areas.
– SEE VIDEO, Read more by clicking here (via CNN)