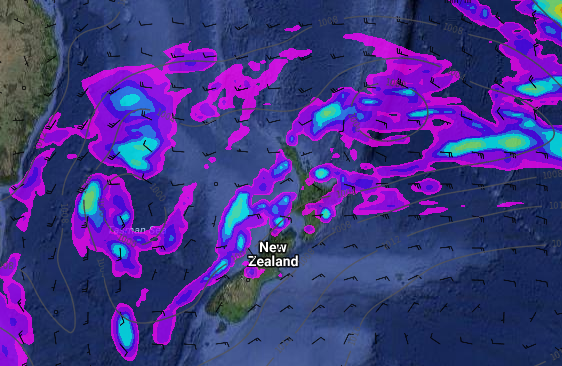 With afternoon heating there may even be a few isolated thunderstorms popping up as the humid easterlies push through across Wednesday and Thursday.

A large area of low pressure covers the Tasman Sea and North Island – while high pressure remains to our east and south keeping the same pattern in place.

Around this Friday and Saturday it starts to ease a bit in the north as a westerly change starts to develop.

The first week or two of October looks mild with air coming out of Australia once again – then perhaps a more traditional spring-like pattern may arrive in October’s first or second week (and by that we mean cold fronts with nor’westers to begin with and cooler sou’westers behind – and more windy westerlies following on afterwards).

Traditionally the windy westerlies kick in around the equinox which was last week, but the bigger weather patterns affecting Australia this spring are clearly impacting the arrival of these westerlies this year so the arrival date may not be until the end of October’s first week, or maybe not until the second week.

While there are some La Nina-like weather conditions around parts of New Zealand right now La Nina is actually measured in the tropics so it’s what’s happening there that will determine when, or if, La Nina if declared this spring or summer – not what is going on just in our part of the world.