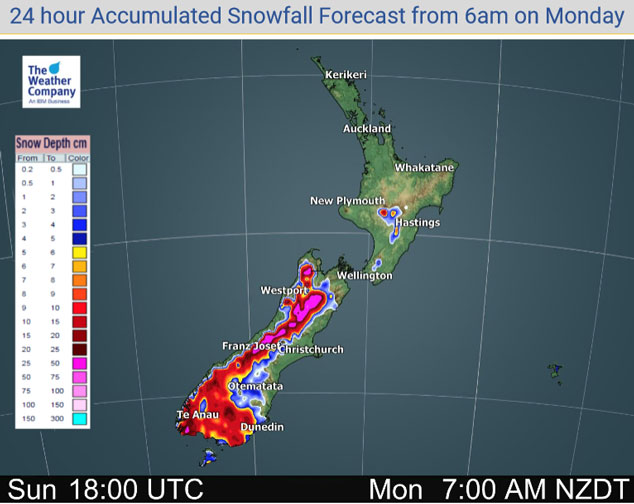 Strong westerlies change to a very cold southwest airflow over the lower South Island tomorrow morning. Snow and bitterly cold winds will become an issue about Southland and Otago. Snow also lowers during the day about the Southern Alps pushing in from the west.

For the western North Island expect showers, especially in the morning then again evening / overnight. During the day dry spells are more frequent with sun at times especially for Northland and Auckland. Bay Of Plenty dries out in the afternoon with some sun then showers return overnight. Morning spots of rain or showers clear the east coast then mostly sunny, showers return to Wairarapa in the evening. Winds are gusty from the west for most, tending strong to gale northwest about the lower North Island from afternoon especially about the likes of Wellington and through Cook Strait.

Rain becoming heavy in the morning for the West Coast, easing to showers around midday as strong west to northwest winds change southwest. Thunderstorms are possible at times with hail. Strong to gale cold southwesterlies develop about Southland in the morning reaching Otago around midday then Canterbury in the afternoon. Rain with the change then easing to showers, for Canterbury showers become restricted to Banks Peninsula in the evening. Expect some hail at times, perhaps even a thunderstorm as the change pushes northwards. Winds before the change are strong to gale northwest (possibly rising to severe gale about inland areas).