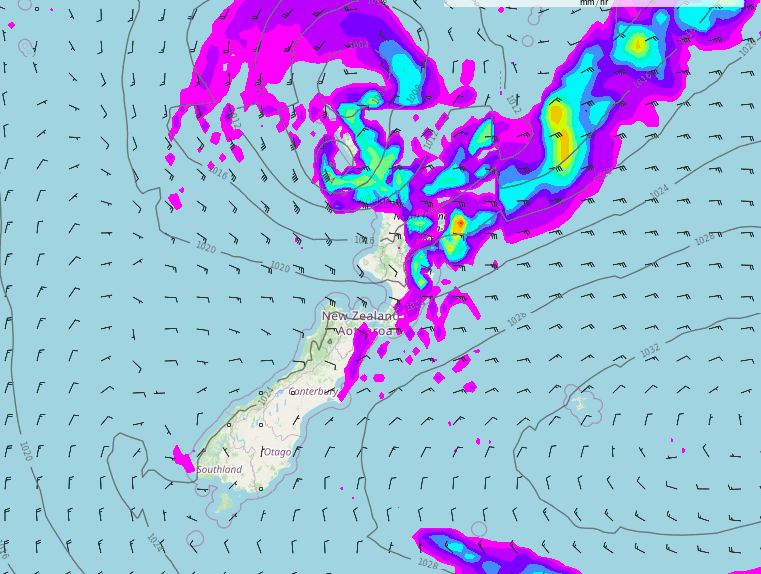 A low near Northland along with a powerful high to the east of NZ are creating a windy zone of weather in the upper North Island, along with isolated pockets of heavy fain (mainly in Northland but also some parts of Coromandel Peninsula and Nelson).

Winds north of Auckland, especially in the east, may reach gale force with the risk of severe gales over 100km/h, even 120km/h around Great Barrier Island. This risk repeats itself early on Tuesday morning for a time too – again mostly north of Auckland City. Elsewhere winds aren’t an issue – with the worst winds confined to eastern areas between Whangarei and Whangaparaoa.

The rain on Sunday and Monday will be patchy with only low accumulations for many northern places, but some isolated pockets will have heavy rain with even a risk of localised flooding in some low lying areas or streams – again northern and eastern areas are most at risk. In Auckland the rain falls apart to showers and drizzle patches.

Keep up to date with the latest official Government MetService warnings – which can now be found live updated on the WeatherWatch website: https://www.weatherwatch.co.nz/maps-radars/warnings/metservice

For the most local rainfall totals where you are today – or anywhere across NZ – please refer to RuralWeather.co.nz‘s HOURLY and DAILY totals, or use WeatherWatch.co.nz and our free App: WeatherWatchNZ.

The lower South Island will be the most settled with a colder night on the way and some inland frosts and a colder Monday.