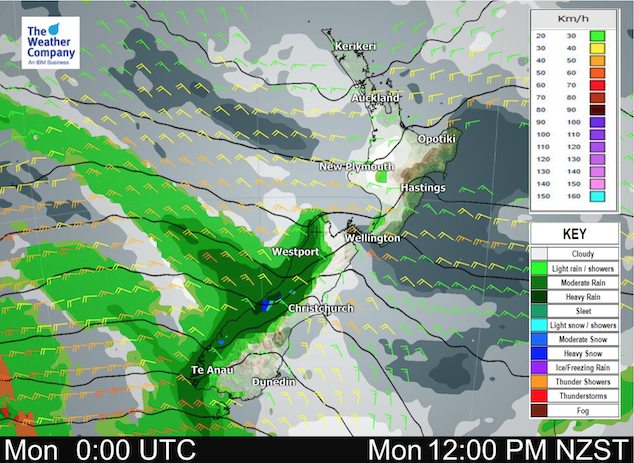 Mostly cloudy in the west, some sun may break through in the afternoon for Auckland and Northland (especially in the east). Light showers at times Waikato southwards in the west. Sunny for Bay Of Plenty, some cloud at times in the west. Sunny for the east coast (Gisborne to Wairarapa). Southwesterly winds for the upper North Island tend to the west during the afternoon, northwesterlies build in the south and east, rising to gale through Cook Strait.

Cloudy for the West Coast with rain, heavy falls for South Westland move into North Westland by midday then easing evening. Mostly cloudy for Nelson with evening rain, Marlborough is mainly dry with cloud thickening up from afternoon. Northwesterlies becoming gusty from afternoon in Marlborough, gales develop about the outer Sounds. Canterbury has high cloud, gusty northwesterlies, strong perhaps for North Canterbury. Rain moves into the high country during the afternoon with heavy falls, easing evening, late evening showers possible near the coast with a southwest change.

Early rain or showers for Southland / Otago then some sun, showers move into Southland again in the afternoon, a shower or two may reach Otago in the evening. Northwesterlies tend to the west in the afternoon.

Today’s max temperatures – High’s may crack into the early 20’s for some eastern regions.