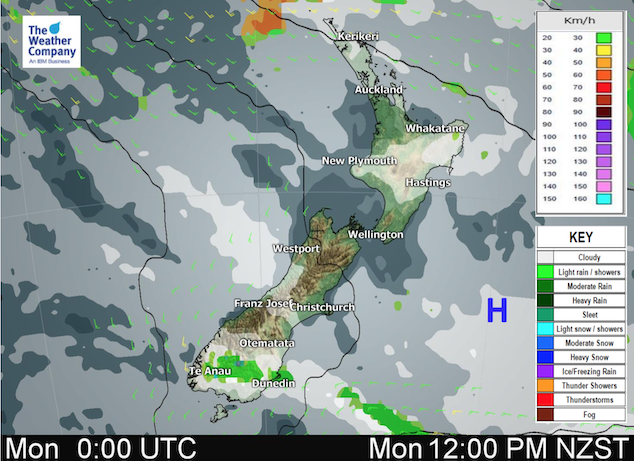 A ridge lies over New Zealand today extending out from an anticyclone in the Tasman Sea, we have a few features at either end of the country but nothing to write home about. On to the forecast……

For most of the upper North Island conditions are mostly sunny, we do have some cloud and a few showers affecting Northland (especially in the east), Great Barrier Island and perhaps Coromandel. Winds are mostly light tending southeast. The lower western North Island (Taranaki through to Wellington) has a mostly sunny day, from afternoon southerlies push into Wellington bringing some cloud and perhaps a drizzle patch or light shower.

Expect a mostly cloudy day for Gisborne and eastern East Cape with the odd shower, a mix of sun and cloud for Hawkes Bay. Mostly sunny for Wairarapa then mid afternoon south to southwest winds pick up bringing increasing cloud and the odd light shower by evening.

The upper / eastern South Island can expect a mainly sunny day, perhaps some early cloud for Canterbury. From afternoon south to southwest winds develop about Canterbury and cloud gradually increases from the south covering Christchurch in the evening. There may be some drizzle develop in the evening also, mainly south and north of Banks Peninsula. Southwesterlies about Southland bring cloud and a few showers, spreading into Otago by midday, showers should ease and conditions become mainly dry by evening as winds fade.

Fiordland has a few morning showers then breaking with mostly sunny weather developing in the afternoon. Further north along the coast expect a mainly sunny day with some high cloud for a time.