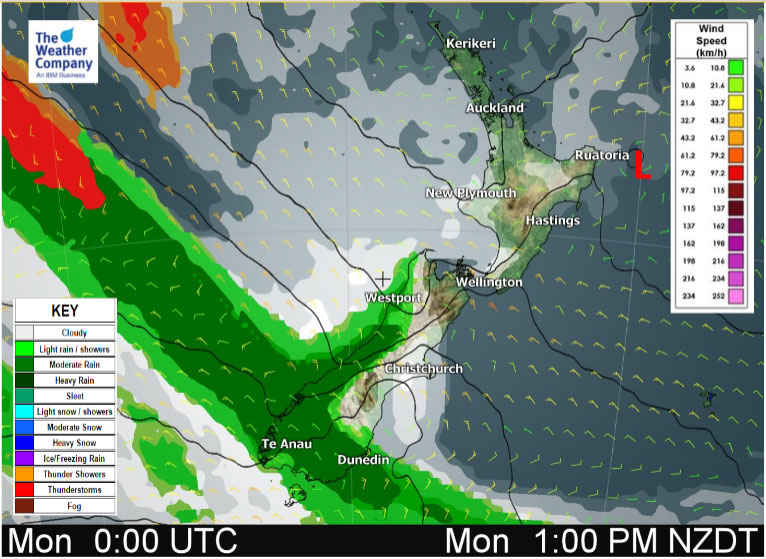 A large anticyclone lies to the north of New Zealand today meanwhile a strong northwesterly airflow sits over the country. A front straddles the far south of the South Island.

Morning cloud for the western North Island breaks to sunny areas and some high cloud, winds from the southwest north of about Taranaki, winds from the west or northwest further south. The east coast has a sunny day, a touch of high cloud at times with northwest winds, afternoon sea breezes possible for Hawkes Bay and Gisborne.

Cloudy for the West Coast with rain or showers, rain about Fiordland will be heavy all day. Mostly sunny about Canterbury in the east up through to Nelson, some high cloud at times and breezy northwesterlies. Cloudy about Southland and Otago, expect rain south of about Otago Peninsula and into Southland, rain may be heavy about Southland at times especially in the west. Winds for most of the South Island from the northwest, light winds for the far south, perhaps tending southerly.

Temperatures ranging from the mid to late twenties for most of the North Island. Some western coastlines may stay in the early twenties. Conversely about Hawkes Bay / Gisborne and Bay Of Plenty highs get into the early to mid thirties, perhaps even late thirties. Mid to late twenty degree temperatures from Nelson down through to Otago Peninsula in the east, perhaps even early thirties. The West Coast south of Greymouth and about Southland and the rest of Otago, highs stay in the late teens or early twenties.