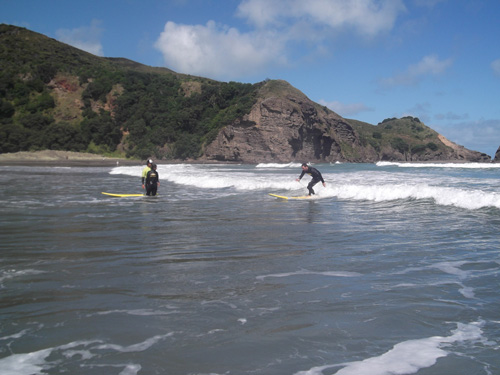 A beginning of a new week continues pretty much with what Sunday had to offer with sunshine almost everywhere and temperatures up a degree or two in some places for the middle of May.

Some cloudy areas could have thickened up overnight but should slowly break throughout the day or basically be non exisitent in many cases.

A high has centered itself close to our shores and should still hang around over the next two or three days.
There’s a couple of blips on the radar with the Far North potentially seeing some cloud and some showers by Wednesday as a low plods in from the north but we’re only stacking it up as a 20% chance…. and the far southwest could see cloudy areas with some drizzle possible.

“The low at the moment looks to mostly miss the north now and an easterly will probably deliever more cloud than anything” says weather analyst Richard Green.”Later in the week could see a disturbance pushing in from the Tasman sea and we’re keeping an eye on that one for now”.

The North Island this morning sees nearly every centre in single figures, including Auckland, however Wellington is the exception and is in the low teens with a nor’ easter.
South Islanders are slightly milder overall with Dunedin and Oamaru in double digits and there’s some low cloud lurking along some eastern and southern coasts.

Temperatures yesterday were up considerably on where they should be for the time of year and 3-5 degrees above normal in some regions.

Sunshine was beaming down for many of us and the outcome saw thermometers touching highs that perhaps might not have been expected with the cooler months here.
Christchurch and Ashburton managed a warm 23 degrees, 22 was recorded in Kaikoura, 21 in New Plymouth and 20s in Tauranga, Napier, Hastings and Masterton.
Monday might not be quite so toasty in these areas however still pretty close to normal levels.

Frosts haven’t taken hold perhaps as expected due to mild temperatures on the whole but light ground frosts or dews can’t be discounted in sheltered inland areas.