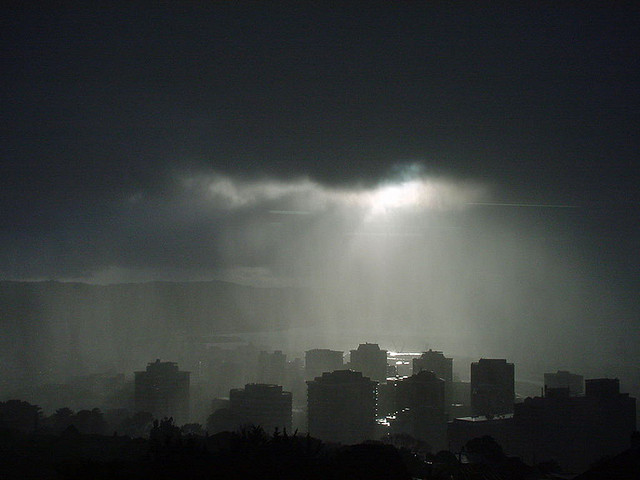 Some rain or showers covered more than half the country today and tonight and tomorrow could see remaining areas on the receiving end of a dose.

The middle of the country saw most action today but isolated areas further north saw a decent fall or two.

“Hopefully some decent falls are on the way tonight and overnight into tomorrow. Here in CHCH today we have terrible pollution…I know that in Hoonhay and Halswell its shocking. Anyone else feel like they need to wear a mask out there? The skies are very hazy too” commented leighton on WeatherWatch today.
We’re picking that Christchurch should see rain within an hour or two.

Another poster said “Been raining pretty much since mid/late yesterday afternoon in Hamilton… Nothing too heavy that I have seen though which is fine by me, I want the soil to soak up the water with no flooding!”

Daniel had checked his rainguage earlier “In the 24 hour period ending 8am this morning, I had 25.5 mm of rain in Greenlane, Auckland”. There could been a little more since it was last measured we believe.

Eliie got in touch “Not enough here in the central North Island – the Rangitikei farms are in desperate need!” and further south there was more rain needed accrding to Kevin” Hardly any rain at all – so far in SE Otago. Fingers crossed it is still coming. The farmers need it”.
Showers or rain whether its patchy or more persistent is likely overnight for many parts and Wednesday it’s looking like a similar theme.

Conditions are brighter on Thursday but by Friday and the start of the weekend another low is likely to make its presence felt. Later Sunday could see another burst plus part of Monday and Tuesday.

So all up it’s lookier rosier for drought affected areas over the next few days as long as the promise of rain actually delivers.