Mexico counts the cost of Patricia – PLUS How you can help

Patricia, the strongest hurricane ever recorded at sea, approached Mexico’s Pacific coast with such ferocity that one official predicted it would become the most dangerous storm in history.

How you can help

By late Saturday afternoon, however, satellite imagery and surface observations from northern Mexico indicated Patricia had degenerated into a remnant area of low pressure, according to the U.S. National Hurricane Center. 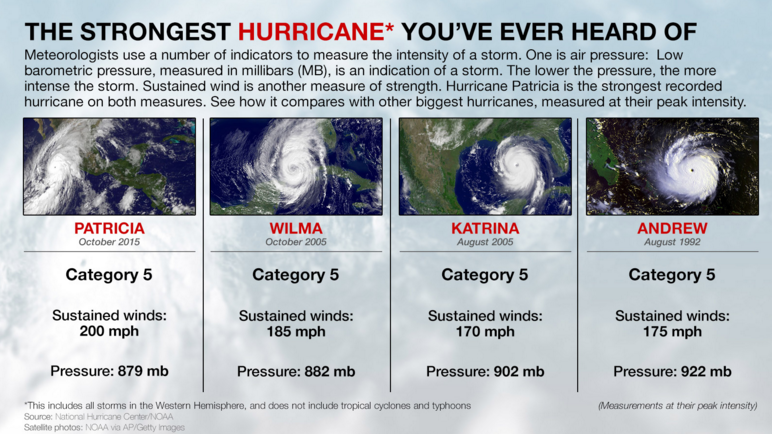 The hurricane center’s final advisory on what had been described as a potentially catastrophic storm came hours after Patricia had been downgraded to a tropical depression, sapped by mountainous terrain, with 35-mph sustained winds.

Mexico apparently dodged a bullet. For now, there are no confirmed reports of storm-related fatalities or major damage.

“We are fortunate the hurricane … went to the mountainous areas,” Communications and Transport Minister Gerardo RuÃ­z Esparza told reporters.

Woke up in the night #Patricia update w latest view from @space_station Thoughts continue for all below #YearInSpace pic.twitter.com/MYmYLA3uPw

“That lessened the impact. The wind and water hit us but our infrastructure was able to withstand that hit. The worst went to the mountains.”

Patricia plowed through a sparsely populated and mountainous stretch of the coast but avoided the resort city of Puerto Vallarta and Manzanillo, home to the largest container port on Mexico’s Pacific seaboard.

‘God helped and watched over us’

Two people died and four people were reported missing in AutlÃ¡n in Jalisco state, Red Cross representative Andres Gomez told CNN. One death was the result of a heart attack, the cause of the other is unclear, according to Gomez.

It’s not known whether the fatalities are storm-related, Gomez said

Still, Mexican officials remained cautiously optimistic throughout the day, with President Enrique PeÃ±a Nieto saying in a tweet Saturday afternoon: “So far, there are no reports of major damage from Patricia.”

“We as government are not supposed to mention faith and God but the only thing I can tell you is that God helped and watched over us so this monster of a hurricane did not hurt us here in Nayarit and in Mexico,” Roberto Sandoval, governor of Nayarit state, told CNN en EspaÃ±ol.

In the coastal municipality of Cihuatlan, not far from where Patricia made landfall, Dr. Antonio Abad tended to more than two dozen patients who suffered cuts from falling branches and chunks of rooftops. But he marveled there weren’t more serious injuries.

Two babies were delivered at the small hospital in Jalisco, a boy on Friday night and — at 5 a.m. Saturday — a girl whose parents refused to name Patricia.

“The parents were asked about naming her after the storm,” Abad said, “but they said they had gone through too much trouble with Patricia already.”

“We expected a much bigger disaster,” he said. “We believe God helped us through this monster hurricane. We’re still here.”

Airports reopened in Manzanillo, Puerto Vallarta, Colima and Tepic, according to RuÃ­z Esparza. There was no major damage to regional ports. Schools are expected to reopen Monday.

“Prevention has saved lives,” he said.

More than 10,000 people, including local residents and tourists, were evacuated to safe areas on Friday but most had returned, officials said.

Mexico’s meteorological agency reported that more than 11 inches of rain had fallen by early Saturday near the inland Nevado de Colima volcano in Jalisco, and forecasters said 8 to 20 inches of rain could fall in several Mexican states.

“It is very important that the population stays in the shelters, the security forces will be patrolling to protect their homes,” PeÃ±a Nieto said. “I repeat, we still can’t let our guard down.”

‘The rain is intense’

Patricia landed 55 miles west-northwest of Manzanillo. It touched down near Cuixmala, a 25,000-acre private estate of beach, jungle and nature reserves that was once home to the late British billionaire James Goldsmith, according to the estate’s website. Its Moorish-style villas, with rates starting at $900 a night, have hosted visitors such as Richard Nixon and Ronald and Nancy Reagan.

“I’m a little worried,” said Carlos Cisneros, an estate worker staffing the phones Friday night. “The rain is intense and the wind picks up at times for about five minutes, then subsides. It comes and goes.”

Cisneros said there were mandatory evacuations in nearby communities where landslides were possible, but he and others at the sprawling estate had to come to work.

Flying an aircraft into a huge hurricane or the other unreliable methods used in the past to take measurements just doesn’t compare with the methods and technology used now.

The Great Hurricane of 1959 which made landfall on the same Mexican coast as Patricia shows this was nothing new or unprecedented in fact Patricia seems rather tame in comparison.