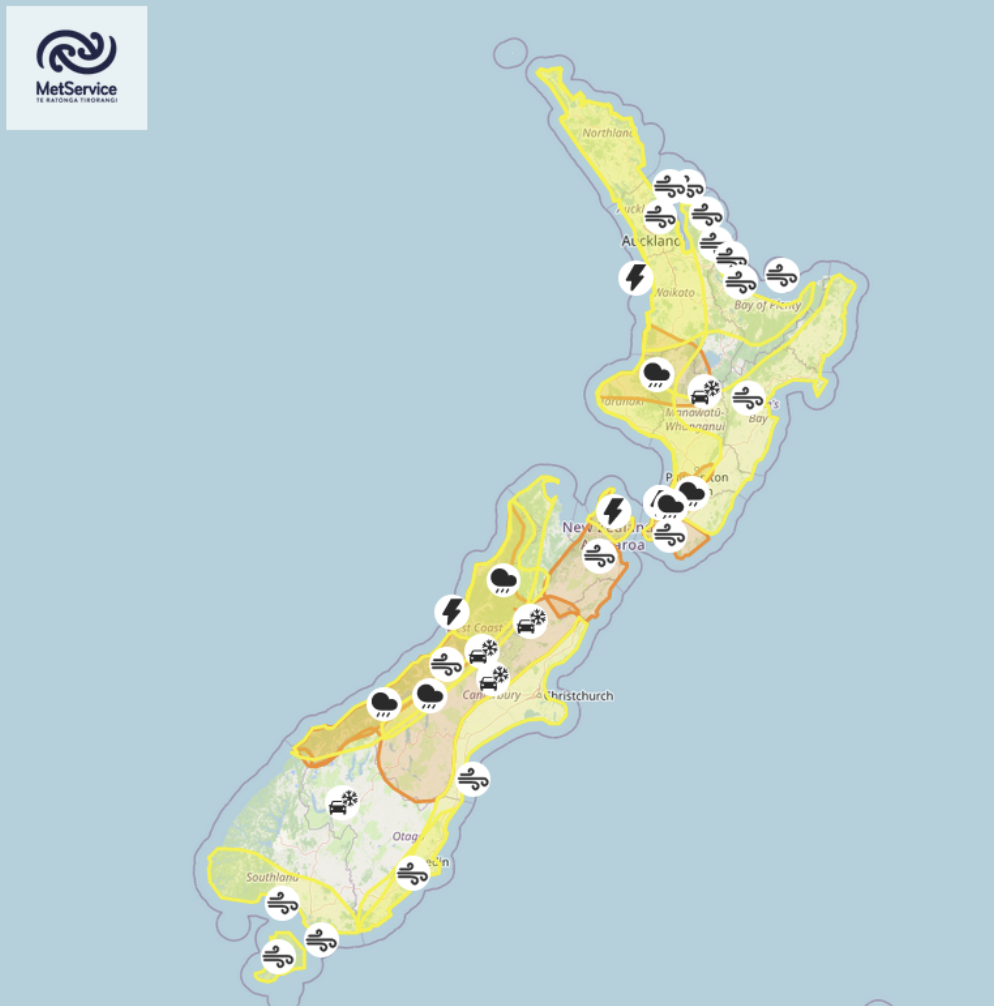 Weather forecasters across NZ have had an exceptionally busy past week, especially those tasked with our nation’s public official Warnings at MetService.

Their severe weather team just experienced one of their busiest weeks in history with a relentless barrage of extreme weather conditions, warnings and watches that spanned across the entire country.

WeatherWatch.co.nz spoke this week with MetService’s General Manager of Meteorological Operations, Ramon Oosterkamp, to get a run down on some of the stats.

“A massive event, and one of which where the duration and persistence of thunderstorms (especially in Wellington) was notable” Mr Oosterkamp told WeatherWatch. “The team are tired (like running a marathon), but very pleased with how it turned out – they did very well. Ironically, a lightning strike struck our Westland radar – taking out some of the electronics”.

We asked if he could drill down on some of the stats.

“For this weather period, there were 123,305 lightning strokes recorded, with 30,704 over land. Comparing to monthly totals of lightning, this would be enough to reach second place for monthly lightning recorded since records began in 2020″

“Until this month the average amount of lightning recorded in June (2001 – 2021) was 15,466 strokes, with the highest month being June 2008 with 44,883 strokes. For New Zealand’s land area, the average amount of June lightning recorded was 2081 strokes, with the highest being recorded in June 2002 with 6811 strokes. Both the previously highest monthly totals for all lightning (over coastal waters and land) and that over land were exceeded in less than 24 hours during the most active phase of this event” says Oosterkamp. Quite a stunning statistic.

“Over the entire lightning record [at MetService], there have only been 14 events (including this one) with seven or more days with at least 100 lightning strokes per day recorded over land”.

So how did all this severe weather translate to weather warnings and watches?

Mr Oosterkamp says the peak of the event saw 42 icons on the MetService weather map. “I can’t ever remember seeing this number of warnings, usually 20 is a lot” although adds MetService has changed the system, adding Swell and Thunderstorms watches and warnings since 1992.

“Certainly, those areas not in the firing line for rain and thunderstorms, saw wind – and the addition of snow warnings and swell warnings added to the number”.

The exact total number of warnings and watches is yet to be tallied by MetService, but needless to say – the past week was not only one for the record books, but it was an exhausting one for the severe weather team at MetService. We hope the team manages to get a break and some sleep-ins before the next event likely rolls on through.