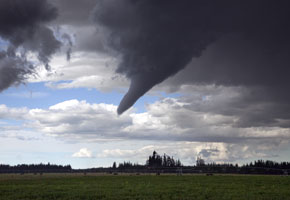 Mainly this is for our non facebook readers who missed out on the live updates from myself while out on the road following this storm. Stephen Burrows a good storm chasing friend and myself went off into Mid Canterbury hoping for a thunderstorm in the afternoon yesterday, we were waiting about Mount Somers from 1.30pm.

We had been keeping an eye on this period of activity a day or two out and Metservice specifically mentioned the possibility of a funnel or tornado happening so that worked out to be a good forecast.

It took a little longer then we suspected but eventually things were building up right over Mount Peel about 5.10pm. Half an hour later we sighted our first funnel cloud of the day, albeit a small one that didn’t last too long. While that was going on we noticed a rapidly building cumulus cloud just to our right and almost from the beginning it seemed to have some element of rotation to it.

At ten to six a large funnel dropped out of this cloud and progressed into the nicest looking funnel cloud I’ve ever seen, and as many may know it did for a time turn into a tornado also uprooting trees at the Mayfield golf course. It finally died at about 6.23pm so from start to finish this lasted at least half an hour which is quite a feat for a funnel / tornado in New Zealand.

A good thing no one got injured by this event and while the golf course got damaged the farmers and club members in the area will have the place in good shape again lickidy split no doubt.

During the day lightning wasn’t a huge component, we did initially see some when the storm starting organising about 5.30pm then later as it drifted off to the east about 6.30pm. The funnels were very much the subject we were following on this chase.

I’ll be putting a report up hopefully tonight of this chase on my website stormchasers.co.nz so look for more photo’s on there in the next day or two. Make sure to like the WeatherWatch.co.nz facebook page as if we are out again live photo’s are posted to the page while events are taking place. We also post to the stormchasers.co.nz facebook page also.

Below is a video taken by Stephen Burrows on this chase, it is not a tornado like in America but quite interesting to watch considering it happened here in NZ. Enjoy!

That’s quite amazing to watch! This is the first time I’ve seen it “forming”. I never knew it “dropped from the sky” – always thought it formed from the ground somehow. Other docs/shows have only shown ones that’s already happening. The odd thing is everything seemed so calm – the ground, the trees, even the clouds didn’t seem to be moving fast?