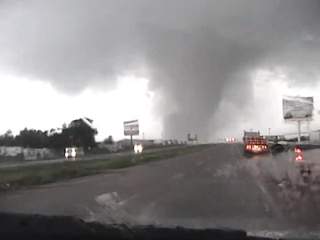 Tornadoes continued to touchdown in the US from Texas to the Canadian border overnight(NZT).
Yesterday two men in their 70s died and more than 40 people were injured in Oklahoma, on the outskirts of Oklahoma city.

Fog has reformed and is affecting a few North Island centres this morning from Hamilton down to Masterton.
They’re forecast to clear from most areas before midday.

There’s potential for heavy bursts of rain with possible thunder for the northwest Nelson region and also parts of Taranaki later today and lasting through tomorrow.WeatherWatch currently has it as a 40-50% chance.

Showers, some thundery with hail could also affect northern North Island regions later today with the chance of small hail.Winds could also pick up if the squally showers push through.

Power has been cut to parts of inland Canterbury, west of Christchurch this morning for a reason unknown at this stage. Rain with some heavy falls have occurred in the area.

Wednesday still appears wet for much of the country with perhaps the east of the North Island just seeing a shower or two.Thunderstorms could also be a part of tomorrow’s menu.
The depression that has affected our weather since before the weekend is set to slowly cross our shores later today, tomorrow and Thursday.