Large ice sheet ‘very close’ to breaking away from Antarctica 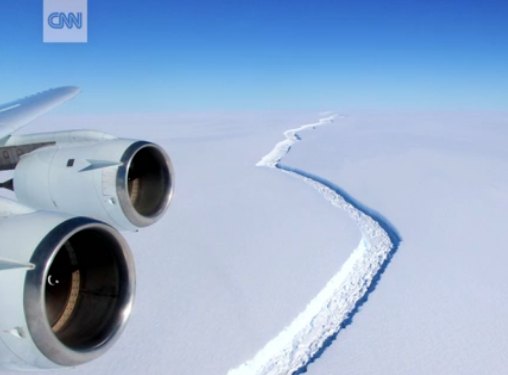 A rift in an Antarctic ice shelf will soon create one of the largest icebergs ever recorded, according to scientists.

In the last six days, the rift in the Larsen C Ice Shelf has grown by 17 kilometers (10.5 miles). It is now 13 kilometers (8 miles) from the edge of the ice.
Until recently, the rift was running parallel to the edge of the ice shelf, but its direction has now changed.
“The rift tip appears to have turned significantly towards the ice front, indicating that the time of calving (breaking away) is probably very close,” said Adrian Luckman, lead researcher in UK-based research team Project MIDAS, which has been monitoring the ice shelf since 2014, in a statement.

A 70 mile rift in the Larsen C is seen on November 10, 2016.
“There appears to be very little to prevent the iceberg from breaking away completely,” he said.
At around 5,000 square kilometers (1,930 square miles) — roughly the size of the state of Delaware — the iceberg will be one of the largest ever recorded.
“When it calves, the Larsen C Ice Shelf will lose more than 10% of its area,” wrote Luckman on the Project MIDAS website in January. “This event will fundamentally change the landscape of the Antarctic Peninsula.”
Poul Christoffersen of the Scott Polar Research Institute at the University of Cambridge, said he is concerned that the rift’s change of direction and the sheer size of the iceberg being produced could cause the whole ice shelf to disintegrate.
“The ice shelf can and probably will undergo a rapid collapse,” he told CNN. “And this isn’t a slow process — it can happen in a day or two.”
The calving of this iceberg “could be the precursor event to something really dramatic,” he said.
When ice shelves disintegrate, ice from the glaciers that feed them can flow faster from the land to the ocean, contributing to sea level rise.
This was demonstrated when Larsen B, a neighboring ice shelf to Larsen C, broke off from its parent in 2002, shattering into millions of pieces.

NASA’s MODIS satellite sensor recorded the Larsen B ice shelf collapse in 2002.
As a result, “its feeding glaciers accelerated, and are still flowing faster than before some 15 years later,” wrote the Project MIDAS team in a blog post in February.
Before it collapsed, Larsen B demonstrated similar behavior to that being currently observed with Larsen C. Seven years earlier, another ice shelf, Larsen A, also broke off from the same ice mass.
“The ice shelves that are collapsing are getting bigger and bigger,” said Christoffersen, who added that he’s concerned about what could happen if huge sheets of ice such as Ross Ice Shelf — which is the size of France — start breaking up too.
Although calving is a natural phenomenon, he said climate change is contributing to the process. As the atmosphere warms up, more water accumulates on the surface of the ice, Christoffersen explained. Ice shelves are also becoming thinner as the oceans around Antarctica absorb heat from the atmosphere.

NASA photographed the rift on August 22, 2016.
These factors can speed up the development of rifts and make it less likely that ice lost in the formation of icebergs will regrow, he said.
“We need to make sure that we curtail our emissions of carbon dioxide so that we don’t destabilize the big ice shelves,” Christoffersen said. “If we go on with business as usual, we are playing with potential changes in sea levels that will affect millions and millions of people.”
CNN’s Kara Fox contributed to this article.
– Visit CNN to view video on this story