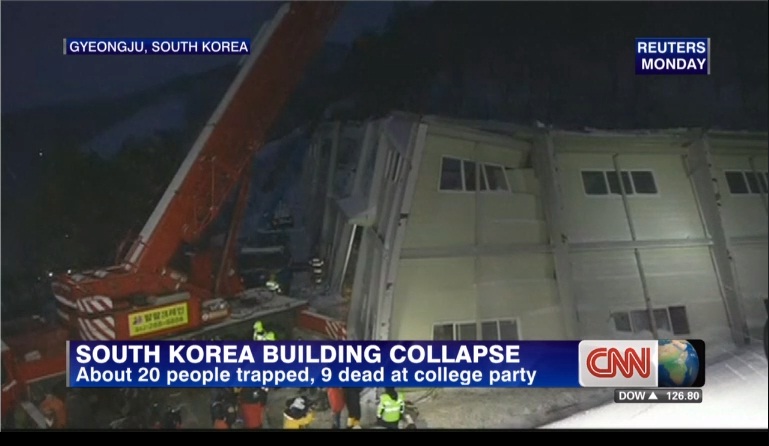 Two of those hurt suffered heavy injuries but their lives are not in danger, officials said.

For hours, South Korea’s Yonhap news agency reported that people were trapped as rescuers rushed to the resort building in the southern city of Gyeongju.

Emergency officials said Tuesday that they believed everyone had been accounted for, but wouldn’t know for sure until the building is dismantled.

Fire officials told Yonhap they had struggled to reach the mountainous area where the resort is located because it was snowing Monday night.

More than 560 first-year college students were in the building for a freshmen welcoming party when the collapse happened at 9:11 p.m. Monday, Yonhap reported.

“My heart is aching and it is very sad,” she said in a statement, calling for “a thorough investigation” into the cause of a the collapse.

Authorities said heavy snow was on the building’s roof, but the cause of the collapse wasn’t immediately determined, according to Yonhap.

The students attend Busan University of Foreign Affairs, about 80 kilometers south of where the party took place, Yonhap reported.

Gyeongju is about 300 kilometers south of the country’s capital, Seoul.