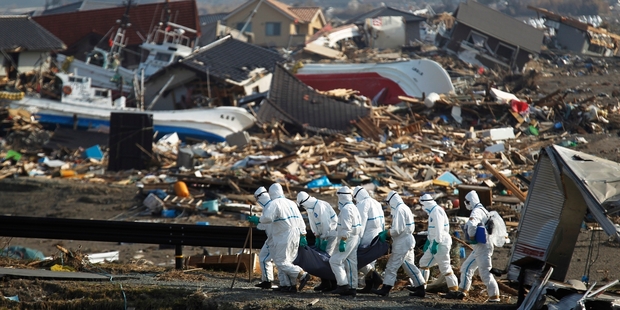 Japan’s prime minister at the time of the 2011 earthquake and tsunami has revealed the country came within a “paper-thin margin” of a nuclear disaster requiring the evacuation of 50 million people.

In an interview to mark the fifth anniversary of the disaster, Naoto Kan described the panic and disarray at the highest levels of the Japanese Government as it fought to control multiple meltdowns at the Fukushima Daiichi nuclear power station.

He said he considered evacuating Tokyo and all other areas within 250km of the plant, and declaring martial law. “The future existence of Japan as a whole was at stake,” he said. “Something on that scale, an evacuation of 50 million, it would have been like a losing a huge war.”

Kan admitted he was frightened and said he got “no clear information” out of Tepco, the plant’s operator.

He was “very shocked” by the performance of Nobuaki Terasaka, his government’s nuclear safety adviser.

“We asked him, ‘Do you know anything about nuclear issues?’

Terasaka was sacked. The then Tepco chairman, Tsunehisa Katsumata, was last week indicted on charges of criminal negligence.

The 9.0-magnitude quake, the largest recorded in Japan, triggered a gigantic tsunami which broke through the plant’s flood defences, cutting off power to its control room and the coolant systems of its reactors.

Deprived of cooling, three of the plant’s six reactors melted down. Explosive hydrogen gas built up, blowing holes in the containment building.

“When we got the report that power had been cut and the coolant had stopped working, that sent a shiver down my spine,” Kan said. “From March 11, when the incident happened, until the 15th, the effects [of radioactive contamination] were expanding geographically.

“From the 16th to the 20th we were able to halt the spread of radiation but the margin left for us was paper thin. If the [fuel rods] had burned through [in] all six reactors, that would definitely have affected Tokyo.

“We were only able to avert a 250km evacuation zone [around the plant] by a wafer-thin margin, thanks to the efforts of people who risked their lives. Next time we might not be so lucky.”

There was a real possibility this could be bigger than Chernobyl. That was a terrible disaster, but there was only one reactor. There were six here.
Naoto Kan
Dramatic CCTV footage from the plant showed a skeleton staff – the Fukushima 50 – struggling to read emergency manuals by torchlight and battling with contradictory, confusing instructions from their superiors at Tepco. Total disaster was averted when seawater was pumped into the reactors, but the plant manager, Masao Yoshida, later said he considered committing hara-kiri, ritual suicide.

“There was so little precise information coming in,” said Kan. “It was very difficult to make clear judgments. I don’t consider myself a nuclear expert, but I did study physics at university. I knew that even based on what little we were hearing, there was a real possibility this could be bigger than Chernobyl.

“That was a terrible disaster, but there was only one reactor there. There were six here.”

Although Fukushima caused no immediate deaths from radiation, it did force the evacuation of almost 400,000 people, most of whom have still been unable to return to their homes.

An area within 20km of the plant remains an exclusion zone. Some studies have identified a higher incidence of child cancer in the wider region.

Kan said that the nuclear accident was “still going on”. He said: “Small amounts of [radioactive] water are leaking out of the reactor every day, despite what Tepco says.”

He said the experience turned him from a supporter of nuclear power into an opponent.

“We shouldn’t be building nuclear power plants in areas where there is a population to be affected,” he said.

“After the tsunami, Japan went without nuclear power for years, so it can be done.”

Not to mention the massive amount irradiated seawater which is now making landfall on coastal areas of the US and even closer to home areas of the North and South Pacific Ocean?

“small amounts of radio-active water leaking” is a criminal understatement. Do some research and get back to me on that statement.